Applying a unique bottom-up approach, we (Eindhoven University of Technology (The Netherlands)) worked collaboratively with ASML, the leading provider of complex lithography systems for the semiconductor industry, to assess the quality of QVTo model transformations. This approach combines sound qualitative methods with solid engineering to proactively improve QVTo quality in a practitioner setting.

Model-driven engineering (MDE) can be used to develop highly reliable software which offers a range of benefits from systems analysis and verification to code generation. In MDE, system models are created by domain experts and then transformed into other models or code using model transformations. One of the languages used for writing these model transformations is QVT Operational Mappings (QVTo) which was specified in the 2007 Object Management Group (OMG) standard for model-to-model transformation languages. QVTo is regularly used by both academics and industry practitioners, including ASML, the leading provider of complex lithography systems for the semiconductor industry. Currently ASML has more than 20,000 lines of QVTo code, supporting more than a hundred model transformations.

Despite its widespread use, however, QVTo is a relatively new language. For general-purpose languages, developers have had time to share best practices and establish a number of standard reference points against which the quality of a piece of code can be judged. These are yet to be developed for QVTo. Moreover, QVTo has a large amount of language-specific constructs which are not available in general-purpose languages or even in other model-to-model transformation languages. In fact, QVTo specifications have been described by some as “rather voluminous” and even “fantastically complex”. Therefore, it is unclear whether established intuitions about code quality apply to QVTo and a lack of standardized and codified best practices is recognized as a serious challenge in assessing their transformation quality.

In a response to this challenge, ASML and Eindhoven University of Technology have joined in an ongoing collaboration to investigate the quality of QVTo transformations. In addition to assessing the quality of a transformation, this project is also seeking to promote the creation of higher-quality transformations from their inception, improving quality proactively [1].

To achieve this goal, a bottom-up approach was used which combined three qualitative methodologies. To begin, a broad exploratory study which included the analysis of interviews with QVTo experts, a review of the existing literature and other materials, and introspection were completed. Then, a QVTo quality model was developed to formalize QVTo transformation quality: this model consisted of high-level quality goals, quality properties, and evaluation procedures. The quality model was validated using the outcomes from a survey of a broad group of QVTo developers in which they were asked to rate each model property on its importance to QVTo code quality.

Many of the model properties recognized as important for QVTo transformation quality are similar to those in traditional languages (e.g., small function size). However, this analysis also highlighted a number of properties which are speciﬁc to QVTo or other model transformation languages. For instance, we found that the following QVTo-specific properties were considered important for quality: the use of only a few black boxes, few queries with side effects, little imperative programming (e.g., for-loops) and small init sections. Deletion using trash-bin patterns was also found to be beneficial for performance as it has high test coverage in relation to functionality [2]. 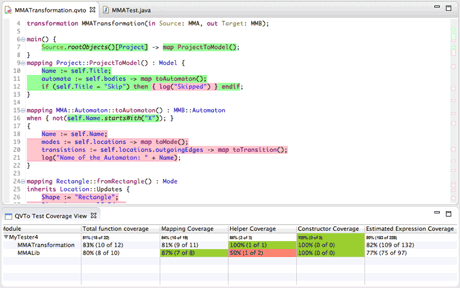 Figure 1: The coverage tool highlights the covered and not covered parts of the QVTo transformation as well as reports coverage-related statistics

Test coverage also emerged as a key issue in the expert interviews, with every interviewee highlighting the lack of a test coverage tool. Consequently, we prioritized this demand and created a test coverage tool for QVTo (Figure 1). Implemented as an Eclipse plugin, the tool helps QVTo developers to create higher-quality transformations from the start: at the developers’ request, the tool reports coverage percentages for different units of QVTo transformations (e.g., mappings, helpers, constructors), as well as visualizing expressions covered and not covered by the tests. During the seven week study period, the tool was used 98 times, resulting in execution of 16,714 unit tests. In addition to assisting with debugging issues, the tool was also used by one developer to prepare a user story, a description of how to complete the specific task of an agile sprint. When preparing the user story, the developer ran the entire test suite and looked at the coverage for the modules he knew would be affected by the task to be completed. He then noted exactly which places in the modules were not covered by the test suite by inspecting the coverage overlay. Then, as part of the list of steps for the feature, he added an additional step stating that before implementation of the feature can begin, additional tests must be written to cover the untested parts. The developers also stated the tool easily identifies dead code. The coverage tool has also been added to the development team’s “Way of working” document, making it an official part of their development process.

As a side product of our research, three patches were submitted, accepted and integrated into the Eclipse QVTo core engine which was released with Eclipse Luna on June 25, 2014. Together, these patches make it possible for QVTo interpreters to easily access the test coverage tool, as well as future tools, such as an integrated profiler [3].

Please contact:
Alexander Serebrenik
Eindhoven University of Technology, The Netherlands
Tel: +31402473595
E-mail: This email address is being protected from spambots. You need JavaScript enabled to view it.