by Isidoros A. Passas, Nicos Komninos and Maria Schina

What might sixty web-based platforms and networks have to tell us about open innovation? The FP7 project T-TRANS aims to define innovation mechanisms for Intelligent Transport Systems (ITS) that facilitate the transfer of related innovative products and services to the market.

The T-TRANS project addresses the difficulties associated with transferring new technologies, and seeks to capitalise on the significant opportunities to improve efficiency and reduce costs once those technologies are commercialised. One of the expected outcomes of the project will be the establishment of a pilot innovation network that is focused on ITS. Initially this network will feature three glocal (global to local) communities that are suitable for ITS commercialisation, referred to as CIMs, and will be implemented in Central Macedonia (Greece), Galicia (Spain) and Latvia. This will set the scene for a more expansive Europe-wide ITS e-innovation network.

With the view to informing the design of this new e-innovation network, T-TRANS partners undertook an analysis to benchmark open innovation platforms and networks [1]. From this work, the partners were able to gain a better understanding of what it takes for a network to serve the objectives of its members and sustain itself effectively. Benchmarking is widely defined as the act of comparatively assessing an organisation’s technologies, production processes and products against leading organisations in similar markets. The T-TRANS benchmarking exercise was based on three main pillars of comparison and assessment: (1) the platform, (2) the collaboration network and (3) the added value of the network and the platform. Each of these pillars has been described by a set of characteristics or attributes. A benchmarking template was developed to capture the data that was included and the indicators that were used to benchmark each characteristic.

Platforms are considered to be those web-based systems that can be programmed and therefore, customised by developers and users. They may also accommodate the goals for on-going collaborative and/or joint initiatives that the original developers could not have possibly contemplated or had time to accommodate. A forthcoming publication by Angelidou et al. [2] presents an analysis of the current trends in innovation strategies set by the companies. The kind of trends that appear are 1) the majority of firms introducing new-to-market innovation do perform in-house R&D; 2) companies turn to open innovation and collaborative networks, especially the formation of global networks, and external knowledge partnerships for the acquisition of knowledge, fresh ideas and market access; 3) users and consumers also play a growing role, increasing the interaction between demand and supply; 4) multinational firms have a leading role in the globalisation of innovation; 5) local knowledge and capabilities as well as proximity to research and education institutions continue to matter for innovation.

A key finding of this work was that the results “indicate that there is no return to the old linear model of innovation, and R&D translates directly and spontaneously to innovation. On the contrary the systemic and network perspective is consolidated and shapes all drivers of innovation creation, such as universities and tertiary education, patenting and technology transfer, knowledge infrastructure and flows, international cooperation, governance and stakeholders’ involvement in shaping policies for innovation. Traditional innovation networks comprising only a few nodes evolve to extremely large networks with hundreds of participants from all over the world. They include local and global partners, but with the spread of ICTs and virtual networks they are becoming glocal, combining local competences with global know-how and access to markets”. This perspective provided the necessary definition framework for collaborative innovation networks and has been used in the T-TRANS benchmarking exercise.

Of the sixty cases considered in the benchmarking analysis, 66% were characterised as platforms and 51% as networks. The objectives of both platforms and networks are very clearly stated and identified. Clear objectives are crucial since they state exactly what the platform and/or network is intended to either build or support. Having clearly defined objectives supports the enrolment of new users and members and on-going operations. Some of the key objectives related to the collaborative design and development of products, problem solving, brainstorming and the creation of communities for crowdsourcing ideas. Interestingly, one of the platform/network combinations we examined provided a gamified community where members could complete missions and earn points and badges. Another identified objective was to support ideas that can hel p improve living conditions, including activities ranging from early stage investment to in-depth research thus, strengthening the social aspect of innovation and the development of innovative new products. 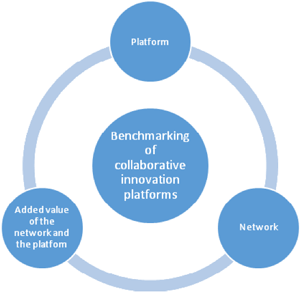 Following an analysis of these objectives, in accordance with the clear statements they made, we found that in the majority of instances the benefits of the platforms and networks we examined were clearly stated as well. Some of the benefits identified included effective cross-cultural collaboration, a deep understanding of complex issues, patent application and invention licencing coaching and collaboration opportunities in R&D and innovation. A commonly identified benefit was the free access to shared knowledge. In general, most of the networks stated that a creative process was much more powerful if it was fuelled by large numbers of participants who were all thinking about the same problem at the same time. The promotion of businesses between inventors and interested parties was another common benefit and crowdsourcing capabilities appeared to be an emerging benefit trend.

Figure 2: The platforms in the analysis were categorised according to which of the seven new product development stages they were involved.

The main supporting actions performed by the networks are towards knowledge transfer, collaboration and joint development. The platforms were categorised into 7 new product development stages as defined by the Coopers’ Stage Gate methodology (Figure 2). The platforms mainly supported the processes which occur in the first four stages: idea generation, screening, concept development and testing and business analysis.

In conclusion, web-based platforms are an essential component of innovation networks, enlarging and extending collaborative opportunities across geographical and time zones and enabling the participation of large numbers of users, inventors and innovators, thus supporting an “innovation-for-all” culture [3].