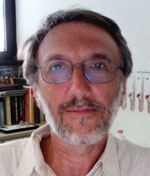 In August 2014 Tommaso Bolognesi, senior researcher at ISTI-CNR, Pisa, was awarded for the second time (the first was in 2011) a prize in the essay contest “How Should Humanity Steer the Future?”, launched by the U.S. institution FQXi (Foundational Questions Institute). His essay, entitled ‘Humanity is much more than the sum of humans’, ambitiously attempts to use ideas on the computational universe conjecture by Wolfram and others, on life as evolving software and on mathematical biology by G. Chaitin, and on integrated information and consciousness by G. Tononi, for providing some formal foundations to the cosmological visions of the French Jesuit and paleontologist Pierre Teilhard de Chardin. The essay can be found and commented at: http://fqxi.org/community/forum/topic/2014.