Over the past two and a half centuries, there have been several technological revolutions: the industrial revolution in around 1770, the introduction of steam engines and railways in the 1830s, the introduction of steel and electricity in the 1870s, the use of mass production from 1910 onwards and finally, the current Information Technology (IT) revolution that began in the 1970s. This modern day revolution is unique: not only has it brought us incredible achievements but it also poses some real threats to our traditional concept of employment.

Our Modern Day Revolution
In the past, technological revolutions have been followed by a stagnation in employment figures as traditional jobs are displaced by the new technologies. Then, as people adapt to those technologies and embrace their benefits, new jobs are created, productivity increases and overall living standards improve. This delay between technological breakthroughs and employment recovery is typically several decades [1]. In the case of the IT revolution, however, recovery seems to be taking much longer.

This prompts us to ask the question “Why?”. Previous technological introductions have also acted as a human labour multiplier. For example, the mechanical loom increased productivity by a factor of approximately 100 but is tiny in comparison with the progress seen in electronics and computers, as described by Moore’s Law. To illustrate this point, consider the invention of the transistor in around 1960: since the introduction of this device, computation costs have been reduced by a factor of 1010. If a similar reduction was seen in aviation costs, it would equate to a brand new Airbus 320 costing one cent as opposed to 100 million dollars.

The IT revolution has been incredibly profound and therefore, it is not surprising that it has had profound consequences. IT goods and services have become relatively inexpensive and virtually ubiquitous and they have been applied to almost every aspect of our day-to-day lives to automate processes from mass production to routine bookkeeping. Now, they are poised to enhance, and in some instances even replace, intellectual processes that have long been thought to be the domain of human intellect alone. Today, IT is being used to guide robots, prepare legal dossiers and even play and win games that call for wit and context such as the popular US game show Jeopardy!.

IT, a Threat to Jobs?
While automation displaced blue-collar workers from repetitive, menial tasks, IT and robotics have accelerated and extended this trend into white-collar sectors. Further, the infinite capabilities of these technologies means they are rapidly making inroads into automating intellectual processes. In the future, it is highly likely that IT will drive our cars, fly our planes, diagnose our diseases and manage our medical treatment. The term “white-collar” was used to described workers whose tasks required no manual dexterity. Now it refers to professionals who engage in unstructured and intellectual work, precisely the tasks that are increasingly being automated. In the last 35 years, corporate profits have grown, thanks largely to the increasing use of IT (Figure 1). Higher corporate profits mean firms have more available capital to invest expanding the IT-guided automation of their processes. As a result, many jobs have already become obsolete and this trend seems likely to continue. Simply put, the IT revolution has made machines cheaper than manpower and consequently, jobs are being lost and personal incomes are decreasing. 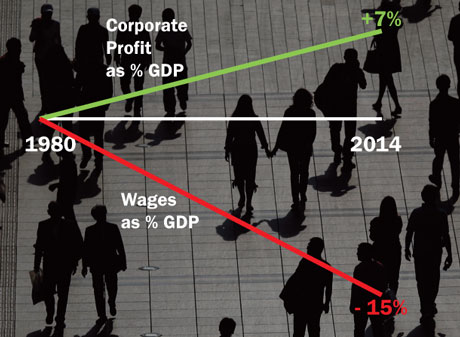 Figure 1: Corporate profits and wages as a percentage of gross domestic product in the US.

For the United States, Frey and Osborne [2] have predicted how jobs will develop over the next two decades. To do this they analysed more than 700 job types and arrived at some startling results. For instance, they predict (with a 90% probability) that telemarketers, bank tellers, insurance agents, file clerks and cashiers will all be replaced by IT. Bus drivers, teachers and flight attendants will also be heavily impacted, with half of all jobs predicted to be supplanted by IT. Overall, they predict an estimated 47% of all current jobs in the US will be eliminated. Psychologists, scientists, engineers and managers, however, appear to be some of the safer professions. Similar changes are taking place in here in Europe although luckily, the European education system better prepares students to deal with IT. More negatively, however, Europe is already facing overall unemployment rates of nearly 12%.

These employment changes are already well underway and this can be seen in the sharply decreasing rates of not only blue-collar incomes, but also some white-collar workers who perform well-structured tasks. In contrast, professionals with intellectual functions have enjoyed steady or increasing salaries. It is undeniable that this discrepancy is exacerbating the already unhealthy redistribution of wealth throughout the world (see C. Murray [3])

Our Challenge
The tidal wave of IT progress is a formidable force. In line with historical patterns, some economists are of the view that in time, society will learn how to embrace the new technologies, leverage IT to find new employment solutions and regain more of an equilibrium. However, the world has never dealt with a revolution that has such a profound scope. Happily, certain jobs will obviously be created. For example, there will be a growing demand for jobs that require a flair for creativity, personal interaction and social skills. In addition, huge numbers of software experts will be needed to adapt computers to handle tasks that are yet to be automated. Programming and analytical skills will also be in high demand. It is certainly true that IT will generate many new jobs, but will these replace the current jobs lost? Education will continue to play a vital role in meeting these future challenges: the financial advantages of having a good education are already evident.

Nonetheless we must do more. We have created some incredible technology and now the question is, can we now channel our inventiveness and ingenuity into creating new classes of work? New jobs that will result in a novel economy that is not simply based on consumable goods? The clock is running and I wish all of us, especially our children, good luck.

Please contact:
Harry Rudin, Computer Networks
E-mail: This email address is being protected from spambots. You need JavaScript enabled to view it.