by Stefan Dulman and Eric Pauwels

The on-going transition to more sustainable energy production methods means that we are moving away from a monolithic, centrally controlled model to one in which both production and consumption are progressively decentralised and localised. This in turn gives rise to complex interacting networks. ICT and mathematics will be instrumental in making these networks more efficient and resilient. This article highlights two research areas that we expect will play an important role in these developments. 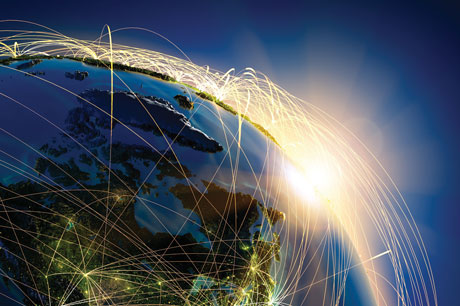 In a future of increasingly adaptive and opportunistically connected energy networks, control and self-organization based on the decentralized computation of global network parameters, will gain importance. Source: Shutterstock

The conﬂuence of various scientific and technological developments in computing, telecommunications and micro-electronics is rapidly ushering in an era in which humans, services, sensors, vehicles, robots and various other devices are all linked and interacting through loosely connected networks. Such networks can be thought of as cyber-physical systems as they build on an interwoven combination of the physical and digital environments, interacting through exchanges of data and control. Although the precise details of such cyber-physical systems will largely depend on the concrete application domain (e.g., logistics, smart energy grids, high precision agriculture), they tend to share a set of common important architectural characteristics. These include a large number of fairly autonomous components interacting at different levels, the routine collection and analysis of massive amounts of data, organic growth and fluidity in participation and an emphasis on decentralised decision making. This latter characteristic results in various levels of self-organisation or in other words a system of systems. The scale at which some of these systems are intended to operate, as well as their impact on society, calls for a principled approach to their design, analysis and validation. Therefore, these developments prompt challenging new research questions, creating novel directions of investigation and shedding new light on established ones.

Smart energy systems (SES) are an important case in point. The on-going transition to more sustainable energy production methods means that we are moving away from a monolithic, centrally controlled model to one in which both production and consumption are progressively decentralised and localised. Furthermore, the growing reliance on renewable energy sources such as wind and solar energy introduces considerable fluctuations to energy production that require a prompt and adequate response. As a result, energy networks are increasingly being twinned with parallel ICT networks that shuttle data, often in real time, between the various stakeholders (e.g., producers, distributors and consumers), with the ultimate goal of making the networks more efficient and resilient. Examples of this type of development include: the massive deployment of sensors to closely monitor network performance (e.g., the roll out of smart meters in many countries); the planned introduction of automated, online auctions and markets to use variable pricing as a stabilising mechanism for counter-acting fluctuations in consumption; and the ambition to decentralise energy production by parcelling the network into islands that are largely self-sufficient.

Obviously, in this short contribution it is impossible to highlight all the important research questions that are currently being explored to tackle the many challenges just mentioned. Rather, we will briefly outline two examples of such developments that piqued our personal interest.

A mathematical research topic that is currently being re-invigorated and has direct bearings on the design of SES is the use of gossip algorithms in distributed computing. As the name suggests, gossip algorithms attempt to compute aggregate (i.e., global) values for important network parameters by relying exclusively on local exchanges of information. Put differently, network nodes only talk to their neighbours, but nevertheless manage to efficiently compute reliable values for global network parameters, such as network-wide averages or maximum values. Such an approach obviates the need to establish a central control authority: since the resulting estimates diffuse across the network, it suffices to query an arbitrary node. Furthermore, these algorithms can be extended to be self-stabilising in the sense that changes in the network topology resulting from re-arrangements of neighbours are rapidly and automatically reflected in the final result.

From the short description above, it transpires that gossip-based aggregate computation addresses several of the key issues in SES. A distributed approach solves many scaling issues and proves to be robust against changes in network topology (e.g., nodes becoming unavailable due to failure or exit, new nodes joining the system). Furthermore, as the protocols rely mainly on anonymous data exchange, privacy issues are alleviated. Last but not least, significant progress is being made in the development of mathematical methodologies to precisely quantify the performance characteristics of these algorithms, in particular, error margins and speed of convergence (e.g., [1]).

A second challenge that is expected to drive future research finds its origin in the heterogeneity of the many ICT resources that are being combined in a typical SES setting. Indeed, although huge amounts of data about various aspects (e.g., production, consumption, storage, pricing, etc.) are routinely being collected, high quality information is still notoriously difficult to come by. Data are often siloed or served up in an unstructured and undocumented format. Data (and resources in general) need to come augmented with widely understood metadata in order to provide sufficient context that other agents can independent process it. This is of particular interest in the nascent field of cross-modal data mining which investigates methodologies that can be used to automatically combine information drawn from heterogeneous sources, for example, how can the content of messages on social media be linked to spikes in consumption data emanating from smart meters? To make this type of analysis possible it is imperative to develop more powerful semantic mediation tools that can automatically identify related concepts in different data sets and establish precise maps between them [2]. We expect that this will spur on further developments in semantic web technologies, in particular ontology alignment and RDF-reasoners.

Again, it is important to re-iterate that such a short contribution cannot do justice to all the different scientific disciplines that are expected to hugely impact SES, such as multi-scale and multi-physics simulations of networks, market mechanisms using multi-agent systems, privacy protection and cyber-security, just to name a few. However, we think that both the topics discussed here will feature prominently in future research and have an important impact, not just on SES research but more generally on the wider class of cyber-physical systems.

Please contact:
Eric Pauwels
CWI, The Netherlands
E-mail: This email address is being protected from spambots. You need JavaScript enabled to view it.

Next issue: April 2021
Special theme:
"Brain-Inspired Computing"
Call for the next issue