The Urban Civics project brings together a multi-disciplinary, trans-atlantic team of experts working towards a common goal that citizens and governments collaborate in achieving participatory democracy in healthy cities.

Technologies that bring together the emerging visions for smart, connected and resource-efficient cities, and the revolutions in social media and mobile networking, offer unprecedented opportunities for participatory democracy, health and sustainability. Early proponents of Smart Cities have advanced the idea of hyper-connected city information systems as a means of promoting operational efficiency and natural resources conservation. However, the idea of citizen participation in the design and control of these systems has been missing. In democratic political systems, optimization in cities also means being responsive to the observations, attitudes and demands of their citizens.

The widespread adoption of social networking and mobile communication, as well as the Internet-of-Things (IoT), citizen-science and open data, generate new information resources for understanding the needs and preferences of citizens from government services. Information generated via citizen science and crowd sensing sources, are particularly good at reflecting the priorities and perceptions of citizens. Inclusive and participatory, “smarter” cities can integrate and leverage these diverse information resources to improve responsiveness to citizens and improve the urban quality of life. For example, environmental conflicts such as air and noise pollution can be better managed. Still, supporting participatory information gathering at urban scales, and integrating that sensed data into information that is relevant to urban governance and moreover, actionable, remains a major research issue. The Urban Civics project tackles this challenge by bringing together a multi-disciplinary team of experts, so that citizens and governments may work together toward healthy cities.

In a nutshell, Urban Civics is developing, from the design to prototype implementation, a middleware solution that tackles the following research question (Figure 1): ‘How can urban data sources be leveraged and comprehensively integrated to accurately capture nuisance issues facing our cities?’. We have specifically concentrated on addressing the following associated research challenges: 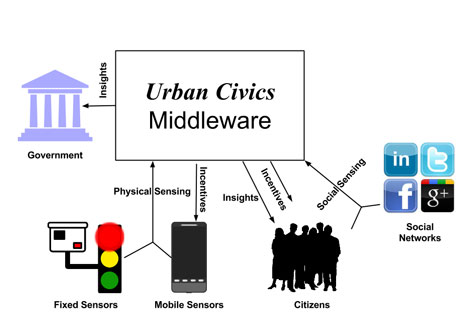 The Urban Civics middleware solution applies to a variety of environmental issues that our cities are currently facing. Indeed, the physical and social sensing approach implemented by Urban Civics remains similar across use-cases dedicated to environment monitoring. Specifically, the approach requires plugging dedicated sensors to provide quantitative data and applications to enable end-users to provide qualitative data, both of which are aggregated through data modelling & assimilation functionalities. The mathematical details vary depending on the use-case specific phenomenon. As an illustration, we discuss noise pollution and air quality below:

Urban Civics is under active development, as part of larger research initiatives oriented toward Smart Cities that are being launched by both University of California, Berkeley, and Inria. The initiatives will promote collaboration between the two organisations. In parallel, we are working closely with the city administration to acquire insights on the broad applicability of Urban Civics.