The delivery of Public Services to citizens is becoming a challenging task, as urban populations increase and the related networks are becoming more complex and entangled. In this article, we present a platform designed for the optimal coordination of a city's public agencies and emergency response teams. Such coordination is particularly relevant in emergency situations when the infrastructures are pushed to their limits.

In a typical modern city, many different agencies are activated, in order to provide citizens with the services that underpin the seamless operation of the urban centres, such as the fire brigade, police department and health care services providers. The management of the actions necessary for this objective is in principle carried out by each organization independently, since a continuous coordination is considered too costly and arduous. A notable exception is the handling of emergency incidents due to their critical nature.

Over the last few years, many Smart City projects have been launched with the purpose of augmenting the capabilities of the relevant agencies in carrying out their tasks. For example, in Amsterdam, the Smart Traffic Management Project is used to administer traffic flow and the European Union (EU) is preparing to launch the new emerging trend of Connected Cars which aims at substantially improving ambulance response times. However, the approach underlying these applications is specialized rather than holistic, as is also the case with the various public agencies involved.

Nonetheless, constantly maintaining a coordinated and synergistic plan can be significantly optimized for a number of reasons. First, this approach translates to a substantial cost reduction in terms of human resources and infrastructure. In addition, the activities of two or more servicing organizations are often interdependent: properly regulated traffic congestion by the traffic police can facilitate enormously ambulances to reach their destination on time. Hence, a unified approach could better serve the interests of the stakeholders and ultimately the citizens of a city. Furthermore, the experience and expertise gained by exercising this type of administration, might prove to be crucial in the event of a large-scale emergency incident, such as an earthquake or extreme weather event.

The ISL laboratory of FORTH-ICS is developing the Smart City Operation Center (SCOC), a platform for the central coordination of the various urban services (Figure 1 shows the main window of the platform). The system receives requests from different locations in the city for servicing tasks and organizes the routes of the different service providing units (e.g. police trucks or ambulances). This is accomplished in such a way that the aforementioned demands are satisfied in the least amount of time possible. Figure 2 presents a toy example of agents cooperating, in order to minimize the time of service. The development of the application begun in December 2013 and in its current version it can support the coordination of small scale emergency scenarios. The plan for the next stage of the development includes the extension of the platform so that it can cope with larger scale emergency events, such as those that occur in mid-sized cities. The long-term objectives are to address the daily administrative requirements associated with all servicing organizations operating in a medium to large city. 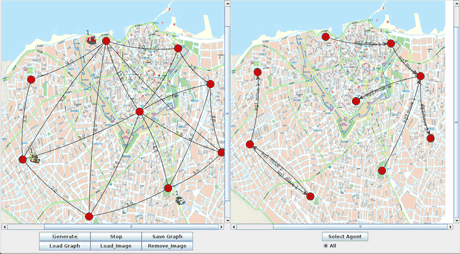 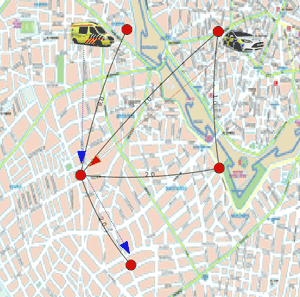 The efficient operation of SCOC relies on the optimal coordination, cooperation and communication between a large number of different agents, each of which has certain capacities and, often, oriented towards separate goals. For this reason, we opted for a synthesis of formal methods adopted from the field of Artificial Intelligence (AI) and Knowledge Representation and Reasoning. Therefore, this work can be regarded as an amalgam of features stemming from solutions of problems like the multiple Traveling Salesperson Problem, graph traversal, planning with temporal and causal constraints and temporal reasoning. The efficient combination of these techniques, however, is far from trivial. The interdependencies between the agents, the partial observability of the environment, the non-deterministic nature of certain actions, the unpredictability of many factors, the appropriate management of vast amounts of information data and other issues related to imperfect communication are some of the challenging complications that have to be considered.

On the technical side, our implementation utilizes two eminent AI paradigms: Action Languages (ALs) and Answer Set Programming (ASP). The former is a family of logical formalisms that is suitable for representing actions and reasoning about their effects. Due to their efficiency in dealing with properties of dynamically-chaning worlds, ALs hold a pivotal role in providing solutions, like model checking and planning, for a multitude of dynamic domains. In our case, they formally represent the dynamic aspects of problem and allow for the formal validation and verification of the solutions generated by the system.

ASP, on the other hand, is a logic-based paradigm that is well suited for performing commonsense reasoning, for modelling an agent’s belief sets and for handling defeasible inferences, preferences and priorities. Some of ASP's main advantages include its efficiency in dealing with incomplete information and the usage of a very expressive, yet, non-complex modelling language. In addition, ASP solvers are rapidly improving, rendering this declarative paradigm to be considered a prominent candidate for addressing large-scale problems. For instance, recently ASP was applied with great success to the highly demanding task of team building in the Gioia-Tauro seaport [1]. However, despite their merits, each of the paradigms has its own drawbacks and one of the biggest challenge is to combine them in a way that harnesses the best of both worlds without assimilating the corresponding pitfalls.

In conclusion, we believe that this work offers practical benefits and will contribute to the more profound comprehension of the theoretical foundations behind related challenging problems. Moreover, it could serve as a guide for the development of other Smart City applications revolving around the emerging field of Multi-Agent Systems.