The objectives of the European FP7 VITAL project are to overcome Internet-of-Things (IoT) silos in Smart Cities and enable the deployment and integration of Internet-Connected-Objects (ICO) independently of the underlying IoT architecture. In achieving these goals, the project assists in the transition towards smart, secure and cost-effective cities.

Using the Internet-of-Things (IoT) to deploy Internet-Connected-Objects (ICOs) in Smart Cities raise several challenges, especially in terms of interoperability. Drawing on semantic interoperability solutions developed for IoT systems, the VITAL project aimed to bridge the numerous silos which exist in IoT deployments in Smart Cities. This was achieved by repurposing and reusing sensors and data streams across multiple applications, without compromising citizens’ security and privacy. This approach promises of increase Return-On-Investment (ROI) figures which are associated with the typically costly development of Smart City infrastructures by expanding the number and scope of potential applications.

IoT technology enables a large number of physical and virtual ICOs to be coordinated so as to provide human-centric services in a variety of sectors, especially in Smart Cities [1]. Many research, pilot and commercial applications have been developed thus far, ranging from those which use a RFID/Wireless Sensor Network to those which involve large numbers of different devices and ICOs. Collectively, these applications have a significant impact on both business and society. Thus, the IoT paradigm is relevant to the development and implementation of sustainable urban development policies. However, a number of IoT systems have been created in parallel which is leading to the creation of IoT application silos within modern Smart Cities (Figure 1). These silos often reflect the organizational structures of local governments. For example, the separation of law enforcement, transportation and public works into three separate departments results in different IoT deployments and the creation of three associated technical silos. 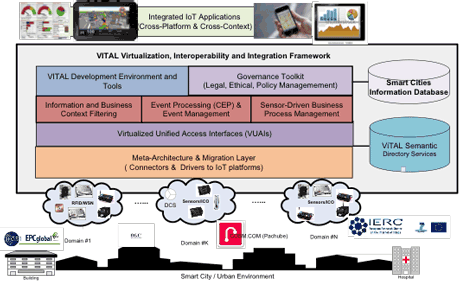 Semantic Interoperability Solutions for the IoT
The interoperability of IoT systems extends beyond technical or syntactic interoperability, towards semantic interoperability which mainly explores the use of a common ontology for describing resources across disjoint IoT systems [1]. Recently, several research initiatives have extended the ontology of the W3C SSN incubator group, which aims to overcome the limitations of pre-existing XML-based formats [2] and the fragmentation of sensor ontologies into specific domains or applications [3]. This ontology describes sensors, observations and related concepts, but not domain concepts (e.g., for Smart Cities).

An example of a system which provides a common semantic layer is the OpenIoT project (see link below). This system enables humans, devices and services to announce and annotate different (virtual) sensors/devices as W3C SSN compliant sensors. OpenIoT offers an open source cloud-based IoT platform which includes components like sensor middleware, cloud data storage and a scheduler (see link below).

VITAL: Semantic Smart City Interoperability
The VITAL project builds on these approaches and extends two main aspects to ensure the semantic interoperability of evolving Smart City IoT applications and projects. It uses the SSN ontology to model data and the OpenIoT as a common data management component. The first extension provides a much richer data model for Smart City applications, including city-wide information (e.g., demographics and stakeholder details) as well as city-specific Key Performance Indicators. The second extension provides interoperable access, not only for data coming from different IoT systems (e.g., OpenIoT) but also for services provided by these systems (e.g., discovery, monitoring and complex event processing). This allows for higher level services to be created which can then be integrated into a single federated service view.

VITAL will be tested in two Smart Cities, London and Istanbul, who are represented in the project consortium by the London Borough of Camden and the Istanbul Metropolitan Municipality, respectively.

Conclusion
VITAL will enable applications and service providers to integrate services and data streams stemming from multiple IoT ecosystems, architectures and middleware infrastructures. This will allow for existing sensors and IoT systems to be reused and repurposed, increasing the ROI on Smart City infrastructures. We hope this will reduce the costs associated with developing new Smart City applications for city authorities and the open developer community and bring time efficiencies, leading to a new wave of applications in cities across Europe.

VITAL is a three year joint European project, started in September 2013 by a consortium of ten partners from Ireland, France, Greece, Italy, Spain, the UK and Turkey.

Please contact:
Gregor Schiele, NUIG, Ireland
E-mail: This email address is being protected from spambots. You need JavaScript enabled to view it.

John Soldatos
Athens Information Technology, Greece
E-mail: This email address is being protected from spambots. You need JavaScript enabled to view it.

Nathalie Mitton, Inria, France
E-mail: This email address is being protected from spambots. You need JavaScript enabled to view it.