Smart Cities enable the physical and virtual worlds to merge, based on Internet Of Things (IoT), data and services. Through Web of Things (WoT), IoT is realized by using the existing web architecture as a platform, thus making smart things directly accessible as web services on the Internet. This approach simplifies object and application deployment, commissioning, maintenance, operation and service composition within both city and building infrastructures. In this work, we focus on cooperative objects to develop an open smart neighbourhood.

The European project Web of Objects WoO (ITEA2 - 10028, January 2012-December 2014) aims to develop a service infrastructure for IoT business applications that enables multi-tenancy, interoperability, and service composition, thus facilitating the building of applications on top of embedded devices. The infrastructure inherits many features from the Web, including bookmarking, caching, linking, searching and securing, and enables mashups for dynamic and ad-hoc composite applications involving embedded devices. Figure 1 describes the WoO architecture based on IoT-A standard. 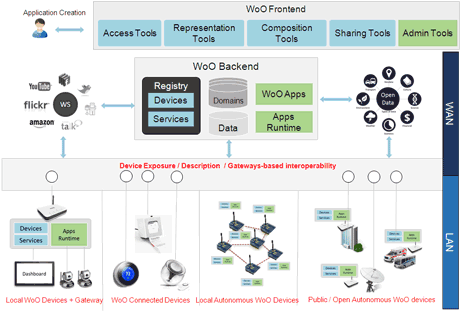 One of the technical challenges we faced on the project was creating social objects with web capabilities. Such features enable to have complex user-created domain oriented applications that can be used both in indoor and outdoor contexts.

At home, several sensors, actuators, and appliances are available (through home automation technologies). In this project, all these resources and capabilities were mapped as services, and provided by means of either Web Services Technologies or REST Technologies [1]. In addition, we used a mobile device platform that provides access to different sensors and objects (GPS locations, NFC reader, vibrator, accelerometer, etc.) to enable the interaction between home objects (NFC door, home appliances, and other sensors managed by a WSAN [2]) and mobile device sensors (NFC reader/writer, GPS locations, etc.). Table 1 presents an overview of the different smart objects that were deployed on the WoO platform. 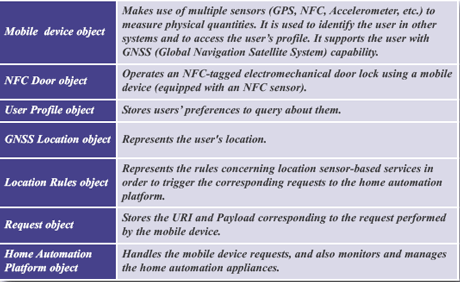 On top of the WoO architecture, we provided a service layer implemented as REST services. For instance, a door lock web accessible service was designed. This door lock can be discovered by means of an NFC Tag and the NFC interaction is performed through an open-source mobile agent (Gloo Android application) with profile-management capabilities.

The main challenges that were faced in this context were: smart object discovery (NFC tags), universal smart object accessibility, mobile interface and sensor access, user profiling, and ad-hoc “on-the-fly” interaction between smart objects (heterogeneity). We developed several scenarios, such as the Location Sensor-Based Services outside Home (see Figure 2). The mobile agent running on the device continuously receives the location coordinates from its GNSS sensor and compares those locations with a user defined proximity area. Whenever the user enters this proximity area, the smartphone automatically triggers a series of requests (based on user-profile and preferences) to control smart objects (for example switching on the heating to a certain temperature). 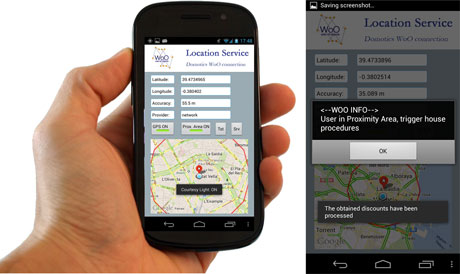 The results to date are very promising: we integrated the previous smart objects with many partners in order to compose an Open Smart Neighbourhood ecosystem on top of the Web of Objects platform. This allowed us to deploy and test some recent research results in projects related with the lnternet of Things, Machine to Machine communication (M2M) and Ambient Intelligence systems development. We have acquired insight into the use of smart WoO objects such as mobile devices, user profiles, location rules, requests, door-locks and smart home objects.

This research is also part of a horizontal task force with other ICT Future Internet projects - such as FIWARE, BUTLER and SOFIA - that deals with building new innovative applications and services for every-day working and living environments. Our work is partially supported by the Spanish MEC INNCORPORA-PTQ 2011, MiTYC TSI-020400-2011-29, and FEDER programs.

Please contact:
Christophe Joubert
Prodevelop, Spain
E-mail: This email address is being protected from spambots. You need JavaScript enabled to view it.