With the smart grid revolution, the energy consumption of houses will play a significant role in the energy system. Indeed, home users are responsible for a significant portion of the world’s energy needs but market prices for this energy remain inelastic (i.e., energy demands do not follow energy prices). Thus, the performance of the whole energy generation and distribution system can be improved by optimizing the management of household energy use. There are a number of challenges associated with this goal including cost, the environmental considerations, user comfort and the presence of multiple decision makers (e.g., the end users and energy operators).

The smart micro-grid is an integrated system which supports distributed energy resources and multiple electrical loads but operates as a single power grid [1]. It is a smaller version of the traditional electrical grid or the smart digitalized grid which working independently of, or interconnected with, a larger existing power network. Smaller scale grids can deliver a wide range of improvements including greater reliability, fewer line losses, better fail recoveries, increased energy efficiencies, carbon emission reductions, reduced demands on the transmission infrastructure, cost reductions. Finally, it introduces the possibility of using alternative energy sources because more localized sources of power generation can be relied on. The global interest in reducing fuel consumption in favor of renewable energies has been a catalyst for the growth in the use of smart micro-grids. They are an ideal way to integrate renewable resources at the community level and allow for customer participation in the electricity enterprise. They enable electricity to be locally generated, distributed and electricity flows to consumers to be regulated.

A smart building system has its own micro-grid and some decentralized resources (e.g., a wind generator, CHP generator, boiler, thermal storage and electrical storage), to provide the basic electricity needs (Fig.1). It may also feature a grid connection which allows it to obtain electricity during peak hours or sell electricity (back to the grid) when surplus electricity is generated. Electric micro-grids are also regarded as a security mechanism as they ensure homes have access to energy during events such as weather-related blackouts or military attacks. All of these benefits are stimulating an increased demand worldwide for micro-grids which are being applied in a variety of contexts including campus and residential environments, military sectors and commercial and industrial markets. The global market for micro-grids topped $5billion in 2011, according to the 2013 Microgrid Market Report and is it seems likely this figure will reach $27 billion by 2022. 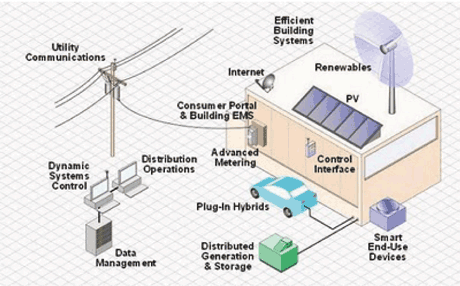 Optimization perspective
With the Smart Grid revolution, the energy consumption of households will play a significant role in the energy system. Indeed, home users are responsible for a significant portion of the world’s energy needs but market prices for this energy remain inelastic (i.e., energy demands do not follow energy prices). Thus, the performance of the whole energy generation and distribution system can be improved by optimizing the management of household energy use. Smart Grid technologies have been deployed in a variety of contexts including smart sensors on distribution lines, smart meters in homes, advanced metering, transmission efficiencies, smart switches, enhanced demand response capabilities, distribution automation, electric vehicle integration and integrated communication systems. These pave the way for the creation of smart self-managing energy grids within a time varying pricing scheme (i.e., where prices may vary according to time of day). The Smart Homes of the future will include automation systems which may simultaneously provide lower energy consumption costs and a comfortable and secure living environment for end users. Residential users are expected to play a key role in improving network efficiency,through the adoption of intelligent mechanisms that manage energy demand. These days, most electricity consumers act as price takers with flat rates and no acknowledgement of the differences that exist in electricity prices. Therefore, they don’t have any incentives to adjust their electricity consumption patterns. However, consumers can optimally adjust their energy consumptions by participating in a house management program which seeks to minimize electricity bills. To achieve this end goal, consumers must respond to shifting electricity prices and redesign their consumption patters to match with periods of lower electricity prices. The user can define the earliest and the latest starting times that a service can be processed, with a utility value identified for each time slot which indicates his or her comfort expectations. Thus, the challenge for the household energy management is to calculate when the optimal starting point occurs across the different household appliances in order to minimize energy costs for the user whilst maximize their satisfaction. In addition to reducing the energy bills of single users, joint management of multiple users can also be advantageous. If energy consumption tasks occurring across multiple homes can be scheduled, based on the suite of users’ requirements, there is potential for reducing ‘peak demand’ periods. As all electricity grids require a minimum energy generation capacity so as to prevent failures and power cuts, overall grid costs might be reduced if peak demands can also be reduced. Peak shaving, as this phenomena is known, reduces the burden on the central grid and any upgrade expenses which may be incurred to ensure the grid can fulfill increasing energy demands. Finally, it also offers savings to both the utility companies and customers by reducing the need for generation capacity and energy amounts the utility companies must purchase on the open market during peak demand periods to prevent failures and power cuts. Thus, reducing the global contractual peak would bring multiple advantages, not just to the electric grid but also to residential users and energy retailers. In the DOLPHIN project, these challenges have been formulated as multi-objective optimization problems.

Energy prices have to be defined not only to retrieve their production costs but also to understand consumer behavior. Consumers choose their services or energy providers with the aim of minimizing their disutility values. A failure to recognize this may lead to significant revenue losses. To ensure this hierarchical and multi-objective decision process is captured, where the leader (energy provider) explicitly takes the reaction of a follower (consumer) into account in their decision process, the energy pricing and management problems can be formulated as bi-level multi-objective problems [2].

Please contact:
Talbi El-Ghazali
University of Lille, Inria, CNRS, France
E-mail: This email address is being protected from spambots. You need JavaScript enabled to view it.