Anthropologists and ICT researchers from France and USA join forces to enable social activists to leverage the tools of the digital revolution.
The increased adoption of mobile devices and social networking mobilizes citizens to monitor their living environment actively. Ultimately this engagement is likely to prompt governments to take action. Therefore, the study of socially-grounded software systems that are dedicated to making cities both smarter and more inclusive holds great potential for cross-domain research among social scientists and computer scientists.

In this context, mobile social networking appears as a significant tool to support social activism within cities. However, the development of information and communication technologies (ICT) for social activism is still in its infancy, ranging from the use of email for internal communication to the Web and social media for mass communication. In terms of integrated platforms, there have been a few initial offerings such as Google Apps for Non Profits. However, Google Apps is a generic platform for organizations and requires significant customization to meet the needs of social activists. At the same time, initiatives like the Social Apps Lab at CITRIS at the University of California, Berkeley, clearly show the potential of mobile devices to generate an active, critical and direct engagement of citizens in social issues, which may increase the impact of social activism.

The AppCivist Vision
AppCivist is a software system being developed by the Social Apps Lab in partnership with Inria, France. It provides a platform for democratic assembly and collective action that lets users make their own applications, called Assemblies, with modular components. An underlying premise of the project is that the development of ICTs for social activism crucially depends on the provision of adequate software tools so that activists can easily assemble applications matching their needs. From a software engineering perspective, architectural principles like service-orientation, coupled with the latest advances in distributed computing, appear as relevant base building blocks. From the social science perspective, social activism relies on a number of key functionalities that may be leveraged and re-used effectively across applications. Such functionalities include the following, among others:

These functionalities encourage proposal-making that is more directly democratic and enable people to make better arguments for their proposals. Making better arguments is key to advancing democratic deliberation. At the same time, the field of social activism brings unique challenges to service-oriented computing in particular and to ICT in general, including the following:

Next Steps: Enabling Rapid Integration of ICT in Social Activism
In view of the above, the objective of our research is to study, from design to prototype implementation, a service-oriented architecture and supporting platform aimed at facilitating the assembly of applications by social activists. Jointly performed at Inria and the Social Apps Lab at the University of California, Berkeley, this research will also involve close consultation with activists. 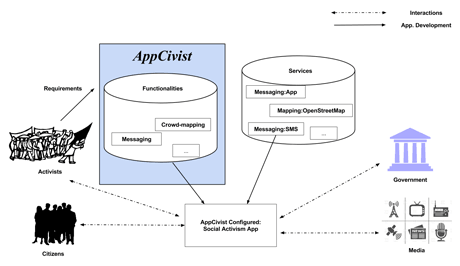 As illustrated in Figure 1, the development of the core platform and associated services for social activism will include algorithms and protocols for filtering and voting, data visualization, assembly of modular components, real-time multi-platform communication between activists and among the general public, mobile-based crowd-sourcing/sensing, and dynamic task-allocation and management among participants. Further, the interplay between mobile and cloud computing entails assessing both cost and social effectiveness.

Please contact:
James Holston
University of California, Berkeley, USA
E-mail: This email address is being protected from spambots. You need JavaScript enabled to view it.

Animesh Pathak
Inria, France
E-mail: This email address is being protected from spambots. You need JavaScript enabled to view it.