by Alexander Hanzlik and Erwin Kristen

The increasing complexity of electronic control systems requires new methods for design, analysis and test of such systems. The DTFSim Data Time Flow Simulator developed at the Austrian Institute of Technology is a discrete-event simulation environment for model-based design, analysis and test of networked control systems for automotive applications. 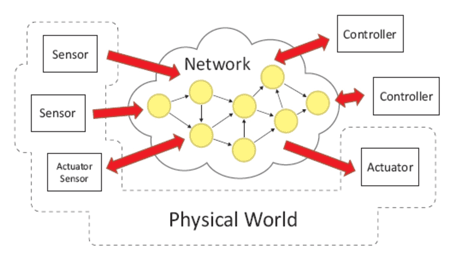 In an NCS, control and feedback signals are exchanged among the different system components in the form of information packages through the communication network.

Principle of Operation
The DTFSim is based on the idea that a NCS can be built by repetitive use of the following parts: 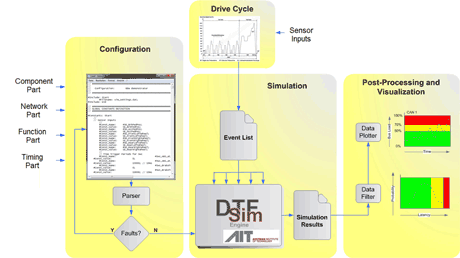 The system architecture, consisting of the component part and the network part, is built using elements from a modular assembly system provided by the DTFSim. These elements are grouped together to from more complex structures, such as an ECU or an Ethernet bus. Typical elements are sensors, processors and actuators. Component functions (function part) are added to the different elements to be able to perform specific control tasks. Finally, each element has a propagation delay (timing part).

DTFSim models consist of “event chains”, where an event chain is a directed path from a sensor to an actuator, with an arbitrary number of elements in between. The simulation aims to determine essential system characteristics, such as the bus load (the load of the communication network) and the control signal latencies (the propagation times of control signals from sensors to actuators). This is achieved by stimulating the system at the model inputs (sensors) and by observing the event and data flow along event chains over time to the actuators.

Current Applications and Future Work
The DTFSim has been developed in the course of the EU ARTEMIS project POLLUX, which was related to the design of electronic control systems for the next generation of electric vehicles. Currently, the DTFSim is deployed in two EU ARTEMIS projects: In MBAT (Combined Model-based Analysis and Testing of Embedded Systems), the DTFSim is deployed in an automotive used case where the performance of an electronic braking system is analyzed by means of a simulation model. In CRYSTAL (Critical System Engineering Acceleration), the DTFSim is also deployed in an automotive use case where it is used for timing analysis of an automatic speed limitation application.
Future work relates to the integration of the DTFSim into an automated verification and validation process for embedded control systems.

Reference:
[1] A. Hanzlik, E. Kristen: “A Methodology for Design, Validation and Performance Analysis of Vehicle Electronic Control Systems”, in proc. of AMAA 2013, Berlin