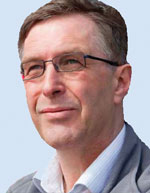 Martin Kersten, Research Fellow at CWI, is awarded the 2014 SIGMOD Edgar F. Codd Innovations Award, the most prestigious prize for researchers who have made innovative and significant contributions to database systems and databases. Kersten received the award on 26 June at the annual ACM SIGMOD/PODS Conference. The Awards Committee recognized the influential contributions of Kersten to the big data problem, his outstanding achievements in scientific research in advanced database architectures and his pioneering work in the realization of MonetDB.

According to Kersten, massive accumulation of data requires fundamental research and changes in database management systems. In MonetDB he has pioneered the columns-store technology since 1993. Nowadays it is the most widespread open-source column-store database management system, which is worldwide used in more than 130 countries with over 300,000 downloads. Since 2011, column-store technology as pioneered in MonetDB has found its way into the product offerings of all major commercial database vendors in relational database systems.