The design of observers for systems with sampled and delayed measurements has been attracting increasing attention. The interest is greatly motivated by many industrial applications. From a practical viewpoint, an observer is a software sensor using a model and online measurements, and providing a real-time estimation of physical quantities which cannot be measured online. Those estimates can then be used for system control (dynamical output feedback) or monitoring (fault diagnosis). The most used observer algorithm is the famous Kalman filter, and its convergence is well established for linear systems. Its variant known as Extended Kalman Filter [1] can be used for nonlinear systems, but with the problems of gain tuning and stability guarantee. After the Luenberger [2] result for linear time-invariant systems, various other works have addressed this problem for nonlinear systems.

Two main approaches are described in the literature: one based on optimization, and one on analysis. In the latter approach, the most common idea is to characterize classes of systems which can be turned into another one, by change of variables (or immersion), allowing for a simpler observer design. The approach thus takes advantage of explicit structures, but remains dependent on the appropriate forms. Our work falls within this second approach. Very frequently we meet a system with: nonlinear characteristics, partial measurements, sampled measurements, measurements with errors, measurements with delays or uncertain sampling schedule. In fact, we rarely meet a system without one of these “annoying features”! The main question is then: How can we design a global exponential observer for such a system?

Figure 1: Structure of the observer z(t) given the system x(t).

Our team recently proposed new robust observers with respect to measurement errors and perturbations of the sampling schedule which use robust global exponential state predictors [3]. The global exponential sampled-data observers design is accomplished by using a small gain approach. Sufficient conditions are provided, which involve both the delay and the sampling period. The structure of the proposed observer, illustrated in Figure 1 can be described as follows: 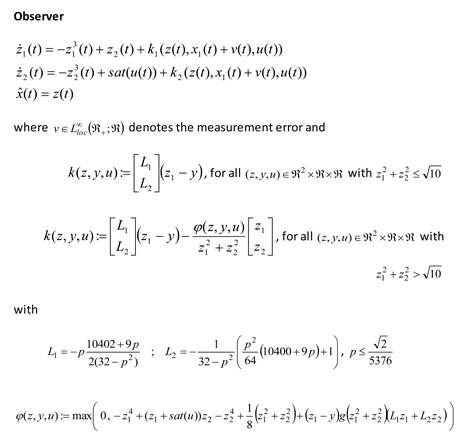 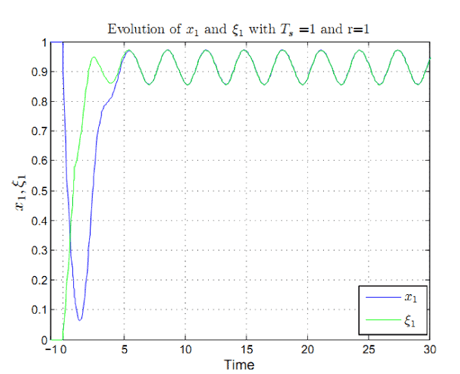 Figure 4: Time evolution of the first component of the observation error (x(t) – z(t)).

For example, for the system x(t) in Figure 2, the designed observer z(t) is given in Figure 3, and Figure 4 shows the exponential convergence of the observation error (x(t) – z(t)) to zero.

Iasson Karafyllis, National Technical University of Athens, Greece
E-mail: This email address is being protected from spambots. You need JavaScript enabled to view it.

Françoise Lamnabhi-Lagarrigue CNRS-EECI SUPELEC, France
E-mail: This email address is being protected from spambots. You need JavaScript enabled to view it.