by Jean-Pierre Richard and Wilfrid Perruquetti

For engineers, a wide variety of information is not directly obtained through measurement. Some parameters (e.g. constants of an electrical actuator, time delays in communication) or internal variables (torques applied to a robot arm, posture and localization of a mobile, detection of impacts or angles in biped walk, etc.) are unknown or are not measured. Similarly, more often than not, signals from sensors are distorted and tainted by measurement noises. To control such processes, and to extract information conveyed by the signals, one often has to estimate parameters or variables.

Estimation can concern parameters (identification), states (observation), derivatives (differentiation), inputs (left inversion) or noisy data (filtering). Consequently, a vast number of results have already been produced in this area, concerning either control or signal processing. However, unlike traditional methods, the majority of which pertain to asymptotic statistics, the particularity of Non-A is to develop algorithms which converge after a finite-time. This is summarized in the project’s name: “Non-Asymptotic estimation for online systems”.

The Non-A project-team is a joint action of Inria with Ecole Centrale de Lille, University of Lille 1 and CNRS (LAGIS UMR 8219). It also involves members from ENSEA Cergy, University of Reims and University of Lorraine. It is located at the Inria research centre Lille North-Europe and involves 23 people (Researchers, PhD students, Post-Doc, Engineers) from 13 countries. It was created in January 2011 in the continuity of a previous project ALIEN (led by Michel Fliess). After having successfully undergone its evaluation in 2013, Non-A is being supported by Inria until the end of 2017.

Why do we develop finite-time algorithms? In most fields of application, the time response constraint is crucial. Using our algorithms, computations are performed in real-time (i.e. as the application is running). Finite time convergence can benefit both the engineer who has to fulfill design specifications prior to certification, and the control researcher looking for a mathematical proof of their “separation principle”.

Two complementary alternatives for finite-time estimation are considered. The first develops an algebraic framework for identification initiated in 2003 (Fliess, Sira-Ramirez, ESAIM COCV, 9, 151-168). Recent results concern the fast estimation of time-delay systems [1], of frequencies in noisy periodic signals [2], of modes and states in switched systems [1], of impulsive systems, as well as the differentiation of multivariate signals. The other develops the concept of homogeneous nonlinear systems and observers: roughly speaking, homogeneity [3] allows for extending local results, on a sphere, to global ones, in the whole space. Very recently we generalized this concept to time delay systems. Homogeneity applies to control, input-to-state stability and finite-time observers, and also to fixed-time stabilization [3], where the convergence time is fixed independently of the system’s initial conditions (Figure 1). 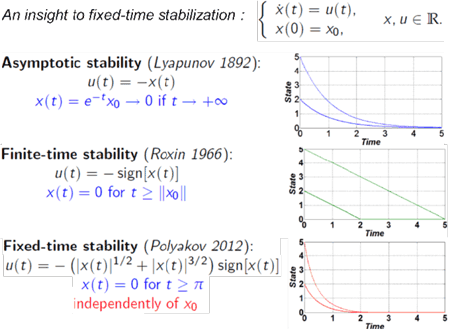 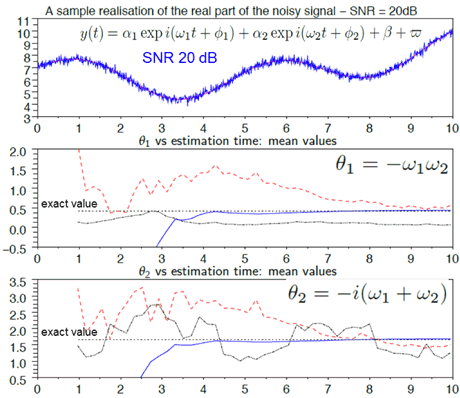 Rather than being oriented to a specific domain of application, Non-A is a method-driven project (namely, algebra and homogeneity for fast estimation and control). However, one must not forget that applicability remains a guideline in all our research. In the long term we will be concentrating our engineering effort on the Internet of Things, and more particularly the self-deployment of WSAN. Various packages are being developed within the ROS environment, to assist with robot cooperation: e.g., cooperative SLAM, path-planning and path-tracking and localization with a reduced number of landmarks. In a more ad-hoc way, some work also has an environmental focus: biology (rhythms of bivalve molluscs for pollution detection), meteorology (sunshine prediction for solar energy management), fluid mechanics (limit flow control for energy saving).

All the project’s publications are available at
http://www.inria.fr/en/teams/non-a/(section)/publications