Public transport operators suffer from the high energy consumption of their underground stations. Lighting, ventilation and vertical transport are crucial systems for the safety and comfort of passengers, but they represent the largest part of the non-traction energy required in metros. Intelligent control of these subsystems, however, can significantly reduce their energy consumption without impacting passenger comfort or safety or requiring expensive refurbishment of existing equipment.

Within the FP7 project SEAM4US, a system for intelligent energy management of public underground spaces has been developed, integrating cyber-physical systems to monitor the physical state of the station, passenger flow and energy consumption of all subsystems, as well as to control lights, fans and escalators. The system prototype has been deployed in the Passeig de Gràcia metro station in Barcelona. During its development, we have focused on building upon existing infrastructure that was not designed for energy efficiency while adding just as much additional technology as is necessary. 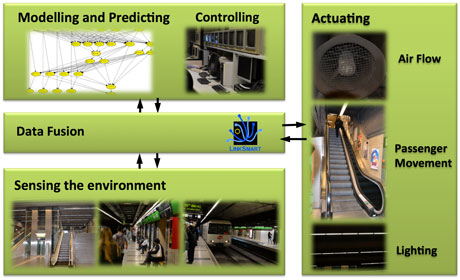 The SEAM4US system employs passenger density models and thermal models, integrating sensors and control algorithms in a model predictive control architecture that grants the optimal operation of the station plants under different occupancy and thermal conditions [1]. In this architecture, environmental parameters of the models are fed with sensor data, allowing the system to predict the environmental state depending on the chosen control policy. The results of this prediction determine the actual control output, while the effects of this control are also monitored to contribute to the calibration and learning process of the models.

A large wireless sensor network has been developed and deployed in the station, providing the thermal model with the current thermal state of the underground space. It has been designed to minimize energy consumption and maintenance work, specifically optimizing the operation of wireless sensor nodes in order to reduce battery replacement intervals, and providing self-diagnostics and self-configuration capabilities to ensure correct operation without human intervention. The positions of wireless sensor nodes and the frequency of sensor readings have been defined to allow the system to adapt to changes in energy consumption, user and environmental models. Existing CCTV cameras are enhanced with image processing to detect current and predict future levels of passenger density. Privacy of passengers is protected by performing all processing locally, filtering the image data to avoid recognisability of individuals, and transmitting only density levels in terms of integer numbers. In addition, an extensive network of smart meters has been installed to monitor energy consumption during the operation of the system and feeding it back to the model.

Control components have been developed to dynamically control the station lighting system, passenger transport, and ventilation. Based on a number of complex station models, combining input from the monitoring components with predictions about the state of the underground space, fan speed is adjusted proactively to optimize both air quality and energy consumption. Installation of a dedicated PLC and control logic allow for stepless control of the fan frequency while leaving the operation of this safety-critical system unimpeded by ensuring that the existing SCADA system, accessible by operators in the station or the Operations Control Center (OCC), always has priority and automatically takes over control if the SEAM4US system fails. By changing the escalator speed according to the predicted passenger density level, setting it to a slightly lower level for most of the time, escalator energy consumption can be reduced. Full speed is only required during peak times to ensure maximum capacity for passenger transport. Additional presence sensors ensure the safety of passengers, allowing the escalator to stop when no passengers are using it and to start when a person is approaching. As a complimentary approach, but integrated within the overall framework, a strategy for involving passengers in the energy-saving effort has also been developed by Fraunhofer FIT. By the use of a smartphone application, passengers are rewarded for taking the stairs instead of the escalators. This allows the SEAM4US system to run the escalators in energy-saving mode for longer periods of time. Dimmable LED lights have been deployed in the station, the brightness of which is controlled reactively according to current occupancy. While passenger safety requires more light when fewer people are present, luminosity can be reduced during peak times, however this level is obviously determined by legal and passenger comfort constraints. The system supervision component maximizes the reliability of the system and monitors the level of confidence of the system’s predictions.

System development was coordinated by Fraunhofer FIT and is based on the LinkSmart middleware for networking heterogeneous devices and subsystems [2]. By means of its publish-subscribe mechanism, it enables efficient interfacing of architecturally independent components. In order to provide better support for energy efficiency applications of public transport spaces, it was enhanced with specific services for spatial modelling and handling of large amounts of event data. New components have been developed to integrate the existing station hardware as well as the newly installed sensors and actuators.

The result of this project is a complete prototypical solution for intelligent energy management of public underground spaces that integrates both existing and new infrastructure. The consortium consists of nine partners: