The domain of industrial systems is increasingly changing as it adopts emerging Internet based concepts, technologies, tools and methodologies. The rapid advances in computational power, coupled with the benefits of the Cloud and its services, has the potential to give rise to a new generation of service-based industrial systems whose functionalities reside in-Cloud (Cyber) and on-devices and systems (Physical).

As we move towards an infrastructure that is increasingly dependent on monitoring of the real world, timely evaluation of data acquired and timely applicability of management (control), several new challenges arise. Future factories [1] are expected to be complex System of Systems (SoS) that will empower a new generation of applications and services that, as yet, are impossible to realise owing to technical and financial limitations. The European IMC-AESOP project is a visionary undertaking by key industrial players such as Schneider Electric, SAP, Honeywell and Microsoft, investigating the applicability of cloud-based Cyber-Physical Systems (CPS) [2] and Service Oriented Architectures (SOA) [1] in industrial systems, such as monitoring of paper production machines by FluidHouse (Finland) and lubrication monitoring and control systems in mining industry by LKAB (Sweden).

The Factory of the Future (FoF) [1] will rely on a large ecosystem of systems in which large scale collaboration will take place. Additionally, it is expected that CPS will harness the benefits of emerging Cloud Computing, including resource-flexibility and scalability. This not only has the potential to enhance the functionality of CPS, but will also enable a much wider consumption of CPS’s data and services. The result will be a highly dynamic flat information-driven infrastructure that will empower the rapid development of better and more efficient next generation industrial applications whilst simultaneously satisfying the agility required by modern enterprises.

The first step in the infrastructure evolution was to empower the individual devices with Web services, and enable them to participate in a service-based infrastructure [1]. This is achieved by enabling them to: (i) expose their functionalities as services, and (ii) empower them to discover and call other (web) services to complement their own functionalities. The next step is to take advantage of modern capabilities in software and hardware, such as the Cloud and the benefits it offers. CPS have two key parts integrated in balance: the physical part for interacting with the physical environment (e.g. composed of sensors and actuator constellations), and the cyber part, which is the software part managing and enhancing the hardware capabilities of the CPS as well as its interaction with the cyber-world. The prevalence of the Cloud and its benefits enables us to expand the cyber-part of the CPS and distribute it on-device and in-Cloud. This gives rise to a new generation of Cloud-Based CPS that may revolutionize the Industrial Systems domain.

Cloud-based CPS and SOA may lead to a new information-driven infrastructure. Today, plant automation systems are composed and structured by several domains viewed and interacting in a hierarchical fashion mainly following the specifications of standard enterprise architectures. However, with the empowerment offered by modern SOA, the functionalities of each system or even device can be offered as one or more services of varying complexity, which may be hosted in the Cloud and composed by other (potentially cross-layer) services [3]. Hence, although the traditional hierarchical view coexists, there is now a flat information-based architecture that depends on a big variety of services exposed by the CPS [2], and their composition. Next generation industrial applications can now be rapidly composed by selecting and combining the new information and capabilities offered (as services in the Cloud) to realise their goals. The envisioned transition to the future Cloud-based industrial systems is depicted in Figure 1. 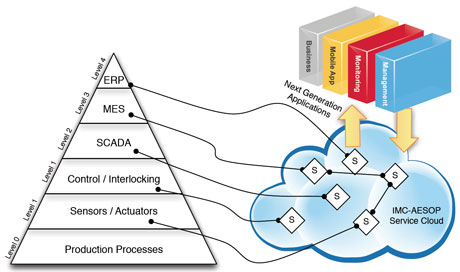 The Cloud enabled CPS have profound implications for the design, development, and operation of CPS. Although the device-specific part, i.e. the cyber (on-device) and physical part are still expected to work closely together and provide the basic functionalities for the CPS, the in-Cloud cyber part may evolve independently. Due to its nature, the in-Cloud part will require connectivity of the CPS with the Cloud where added-value sophisticated capabilities may reside. In contrast, the on-device cyber-part may consider opportunistic connections to the Cloud, but in general should operate autonomously and in-sync with the physical part. The nature of the functionalities as well as the degree of their dependence on external resources, computational power, operational scenarios, network connectivity etc. will be the key factor for hosting them on-device or in-Cloud. The IMC-AESOP project has proposed an architecture and services [3] that are based on this vision.