SICS researchers are investigating how to equip aerial drones with service-oriented interfaces and ways to facilitate the programming of a fleet of drones.

Aerial drones, such as the one in Figure 1, are formidable mobile computing platforms. Their ability to move in an almost unconstrained manner allows them to sense from, and act on, areas that cannot be reached by traditional devices. As the cost of aerial drones drops (see Links 1 and 2) and drone technology progressively moves into the mainstream (See Links 1,3), aerial drones are expected to add to the arsenal of technology that allows Cyber-Physical Systems to bridge the gap between the digital and physical worlds. This will enable applications that are currently unfeasible, such as pollution monitoring at altitude (see Links 4 and 5) and autonomous last-mile deliveries [3], while reducing costs compared with current practices. 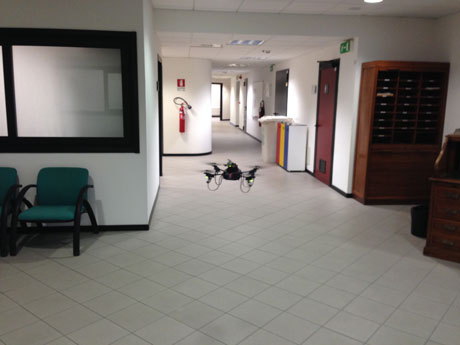 SICS researchers are currently investigating, for example, how to equip aerial drones with service-oriented interfaces, allowing existing business process and web mash-ups to transparently integrate the functionality provided by aerial drones. These devices are thus perceived as “mobile” web services providing sensory data that can be later input to standard online services at company back-ends or in the cloud. The ability to seamlessly blend aerial drones with existing IT practice will facilitate their large-scale adoption within industry and the public sector.

To complement the efforts above, SICS is researching ways to facilitate the programming of fleets of drones, unveiling the potential available when multiple such devices can cooperatively carry out a higher-level mission. This is achieved by means of a custom programming abstraction that gives programmers the illusion that the drone fleet can be programmed as a single device [1]. Such design hides the intricacies stemming from explicitly managing the communication and coordination among drones, greatly easing their programming.

In addition to designing and implementing the solutions above, SICS is also creating actual prototypes using commercially available drone technology. Based on a customized version of the widespread AR.Drone 2.0, SICS is applying the results of these efforts in multiple real deployments. For instance, in Aquileia (Italy) the programming systems above are helping archeologists at the “Domus dei putti danzanti” obtain aerial maps of the site. The 32,000 m2 area, partly shown in the picture, hosts the ruins of an ancient Roman house dating back to the fourth century BC. A video of one of the custom AR.Drone 2.0 in action in Aquileia can be viewed at youtube.com/watch?v=PPDGO-jc0Is.

Another area in which SICS is applying drone technology is in localization of wireless sensor networks (WSNs). Drones can be used as mobile anchor-points to localize stationary sensor nodes that are deployed over a given area. SICS has performed experiments by connecting a small IEEE 802.15.4 radio chip to a commercially available low-cost drone. The radio was used to perform range and signal-strength measurements to a set of stationary sensor nodes. After fusing the measurements, a median position accuracy of approximately 1.5 m was measured. This is considered appropriate for a wide range of WSN applications.