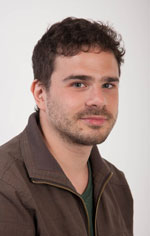 Matteo Mio, ERCIM postdoctoral fellow currently hosted by CWI and previously by Inria (and Ecole Polytechnique), received the 2013 Ackermann Award for his PhD thesis “Game Semantics for Probabilistic mu-Calculi” obtained at the University of Edinburgh in 2012 under the supervision of Prof. Alex Simpson. The Ackermann Award is the “Outstanding Dissertation Award for Logic in Computer Science” of the European Association for Computer Science Logic (EACSL). The award was presented in a ceremony during the 22nd EACSL Annual Conference on Computer Science Logic, Torino, Italy, 2-5 September 2013 (CSL’13).