by Dmitry Rozhdestvenskiy and Petr Bouchner

We address the problem of the introduction of car sharing systems for electric vehicles within big cities through simulation of such systems. Simulation is an important step in the early stages of the development of new technologies. In contrast to standard simulation techniques, this project deals with simulation through introduction of a virtual online system and building up a model of real consumers’ behaviour based on their opinions from “pseudo real” experience.

Simulation is a strong tool which allows researchers to test a hypothesis with different initial conditions and at the same time, in the case of a project with a big outlay, it helps management staff to understand the feasibility of a proposed solution without risking loss of investment capital.

Electric Vehicle (EV) Car Sharing (CS) is such a case. Even a small project with 36 stations and 72 EV in operation requires an investment of more than €26 million (estimated by authors for Prague city), so the question of the popularity of the service and the subsequent load (amount of users) for each station becomes crucial.

Online simulation with virtual experience offers a promising solution. To predict and simulate the human decision-making process and to predict the potential number of customers, we need a strong statistical background. This project offers a different approach: instead of dealing with soft systems and trying to simulate human behaviour, we are letting individuals make their own decisions through a “virtual” service, available on the Internet. This service provides a strong background for analysis and serves as an input for further offline simulations. At the same time it should help inhabitants and visitors of big cities, such as Prague, to understand the benefits of this proposed service and become familiar with EV technology, possibly reducing the impact of the phenomenon of range anxiety.

The simulation software was created with a predefined price policy and predefined CS distribution over the region. This information was obtained from a study that had been performed previously at Czech Technical University [1]. It is possible to update the software to reflect different price models.

To obtain relevant data about consumer decision making in a broader transport context, the simulation offers locally available modes of transport within a selected region, including public transport and taxi services, and calculates time consumption and price for all of them. “Walk on foot” is included as a transport option.

The energy consumption model is introduced to calculate power demand on the infrastructure and developed from the known principles of mechanics and the vehicle parameters. It combines friction resistance, air resistance, acceleration resistance, power required to overcome road slope, electrical loads/losses from “all other” electrical loads in the vehicle from user-related systems, such as climate control, external lights, and entertainment sound systems. Within the calculation, the consumption model takes into account current weather forecast, elevation profile and velocity profile of the route (start/stop at the intersections). The velocity profile is calculated based on the response from Google direction service and depends not only on the maximum speed within a part of the route but also on the individual’s driving style which is determined based on the information provided by consumer.

Simulation provides the user with the ability to set the desired location and destination address (if needed, waypoints can be added) through a GUI (Figure 1). Based on this, together with external information, it calculates price and time consumption for three modes of transportation for the defined route. Simulation software also calculates and displays the state of all vehicles in the system (battery charge, odometers etc.) and represents their current locations. If a vehicle is currently in use by someone else its movement is displayed on a map. 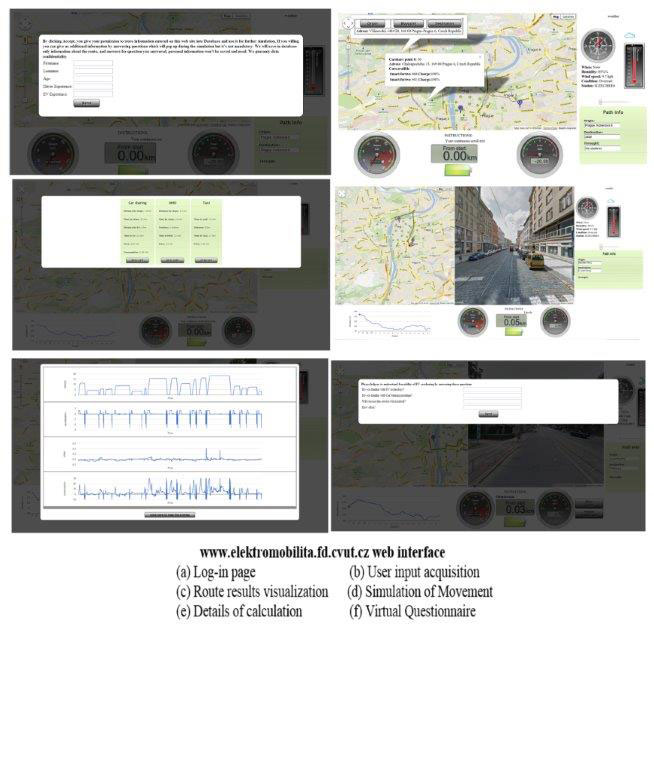 After the calculation is finished, the customer has to choose one mode of transportation. When this decision is made, information about the route is sent and saved in MySQL database. This can be used later for offline simulation.

If a customer chooses the EV car sharing solution, simulation of the movement based on real-time motion planning is displayed on the web interface (in the future it will be possible for the movement to change dynamically during simulation). This provides a real time simulation of EV movement along the route including “windshield” view, indications of the EV’s power consumption, its current speed and route instructions (car navigation style). After the simulation finishes the customer is informed about details of his/her journey via set of performance graphs (Figure 1, bottom left). 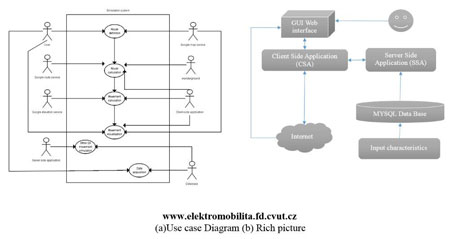 After the simulation software was launched, several tests were performed to understand its functionality and to determine the response of the EV consumption model to different initial conditions such as weather, elevation profile and driver behaviour. The slope of the road has the biggest influence, with an increased slope resulting in up to a 30% increase in energy consumption for a path of a given distance and a given number of crossings. At the same time, weather and driver behaviour can have an influence of up to 10%.

The software is stable and ready for mass usage, but there are still some tasks to be done in further studies, such as the introduction of proper battery charge models, dealing with precision of elevation profiles, introduction of an offline simulation of customer behaviour based on existing data, and an expansion of the population of test drivers, including potential city visitors.