Are electromagnetic fields harmful to the brain? We are continuously exposed to electromagnetic (EM) fields generated by electronic devices such as cell phones. The effects on human bodies by EM waves, especially ones with the frequency range between 3 kHz and 300 GHz, called radio frequency (RF), are of great interest. Reported effects of RF fields on living systems are widely variable; harmful, negligible, or nil. Although no definitive evidence has been found, it is generally considered that exposure to low energy RF waves could be a risk to human health. However some beneficial effects were also reported.

Our research group belongs to the Department of Electronics and Telecommunications at NTNU in Trondheim, Norway and has been working on the effects of EM fields on neurons for about three years. The work was inspired by some results obtained by a group at the Florida Alzheimer’s Disease Research Center in 2010 [1]. The research group anticipated that long-term cell phone use could damage the brain, especially the region controlling memory. The same physical environment as cell phone use for two one-hour periods a day was established, and genetically modified mice mimicking Alzheimer’s disease (AD) as well as healthy mice were put there. After several months of EM wave exposure, the experimental results showed some positive effects for both groups of mice, contrary to what was expected before the experiment; the healthy mice increased cognitive performance, and the AD mice reduced the type of protein which is accumulated in the brain developing AD. This result interests us in the effects of EM fields to the brain; why and how the pathological changes occurred.

Each of the basic building blocks in the central nervous system consists of neurons. The membrane potential at each neuron rapidly rises and falls. This spike-shape event is called an action potential, and repetitive spikes play an important role in communication among neurons. They can be described as nodes of a network to process and transmit information through electrical and chemical signals. The role of message propagation is fundamental when we deal with neurodegenerative diseases, such as AD. Diseases of this type cause damage to the communication network of the brain and the links between neurons.

Our goal is to understand the fundamental mechanism of the network of the neurons on the cellular level, especially the component related to memory. We attempt to establish a scientific explanation for how and why neurons and networks can function as RF wave receivers and demodulators for given RF transmitter characteristics. An induced EM field has thermal and non-thermal components. The non-thermal effects are due to the extremely low frequencies, that is, modulation frequencies of the information signal. The schematic picture showing the process of propagation of EM waves to a neuron is presented in Figure 1. The generated EM waves near the head penetrate the skull and reach neurons in the brain. It is considered that the induced fields could stimulate each neuron and affect the action potential. 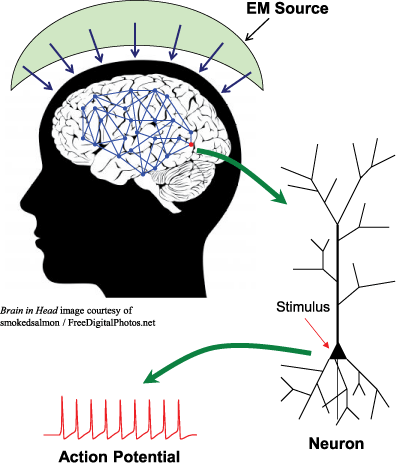 Our work is carried out using “NEURON”, a simulator that models individual neurons and networks of neurons. Simulations of RF fields inside the skull have been already done. However, these data cannot be directly used as inputs for simulations on the neuron level because the scale of neurons is much smaller than that of a skull; without adjustment, the simulated RF would make exactly the same impact upon all neurons in the brain. In practice, each neuron can be affected differently depending on the distance from the source.

For the first step, we have been exploring the effects of RF fields on a single neuron with different types of waves as an input current. When the fundamental mechanism is well-studied, we will move on to simulation with multiple neurons and then eventually a network of neurons at the region playing the role of consolidation of memory. In order to confirm the validity of simulation results, experiments are also required. We are currently concentrating on the theoretical part, but it is necessary to collaborate with neuroscientists in the future. The detailed outline of the project is introduced in [2].

Our research results could potentially help development of some medical treatments in the future. The World Alzheimer’s Report 2009, issued by Alzheimer’s Disease International, estimated that 35.6 million people worldwide would be suffering from the disease in 2010, and the number was estimated to nearly double every 20 years, to 115.4 million in 2050. Development of safe and effective treatments is, therefore, an urgent matter. Surgical implant of a pacemaker-like device into the brain of a patient with mild AD has already started in the US. Elucidation of the mechanism of the neuronal network could enable scientists to invent new types of treatment; for example, it might be possible to develop a nanomachine which stimulates the region of the brain that is malfunctioning owing to a neurodegenerative disease from the outside of or inside the body and reconstruct the network [3].

Please contact:
Rié Komuro, NTNU, Norway
Tel: +47 7359 3670
E-mail: This email address is being protected from spambots. You need JavaScript enabled to view it.


{jcomments on}
Next issue: April 2022
Special theme:
"Fighting Cyber-Crime"
Call for the next issue