by Aurélien Lancin and Dimitri Papadimitriou

The expansion of Internet topology, which comprises thousands of Autonomous Systems (AS), has resulted in a number of important research challenges. The Border Gateway Protocol (BGP), which is used to make core routing decisions on the Internet, starts to show its limitations in terms of the number of routing table entries it can store locally, update in a timely fashion and dynamically exchange. Because it is impractical to deploy newly designed routing protocols on the Internet a large-scale, simulation is an unavoidable step to validate their properties. However, the increasing routing information processing (CPU) and storage (memory) introduces similar challenges for the simulation of state-full routing. For this purpose, we introduce DRMSim a Dynamic Routing Model simulator of routing models on large-scale networks.

Today’s Internet routing system relies on the Border Gateway Protocol (BGP). This path-vector routing protocol that matches both technical and economic aspects of Internetwork routing requires storage and timely updates of individual routing states at each node, i.e., it belongs to the class of adaptive stateful routing. The Internet backbone currently consists of more than 45,000 abstract nodes called Autonomous Systems (AS) and about 450,000 nodes called routers (part of the default-free zone). The number of AS increases at a rate ranging from 10 to 15 % per year, but there is no accompanying increase in the average shortest path length. However, as the Internet AS topology grows, the number of relationships between AS of a similar degree (peering or tangential relationships) increases faster than the number of relationships between low-degree to high-degree nodes (customer-provider or radial relationships). In addition, to address prefix de-aggregation practices (for traffic-engineering purposes), this excess of tangential links results in an increase in the number of BGP routing paths even though the network size itself doesn’t increase. As a consequence, BGP shows its objective performance limits in terms of: 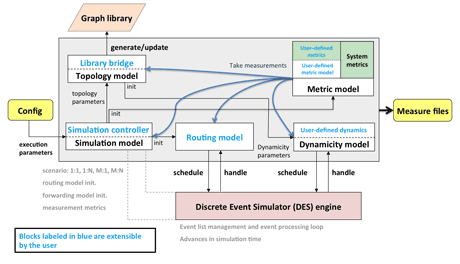 In order to validate the functionality and the performance properties of these routing schemes, we have designed and developed an efficient routing model simulator called DRMSim. This simulator comprises the following features and properties:

Dimitri Papadimitriou, Alcatel-Lucent Bell, Belgium
E-mail: This email address is being protected from spambots. You need JavaScript enabled to view it.