Between 2001 and 2012, the Josef Bozek Research Center of Combustion Engines and Automobiles at the Czech Technical University in Prague, Czech Republic, has been developing innovations in suspension technology. The research team has designed a unique suspension system that uses a linear electric motor as a controlled actuator and provides the desired forces between wheel and car body. Many experiments on energy management in the system have also been undertaken. In order to verify various control strategies and to test ways of optimizing energy consumption, a unique one-quarter-car test stand has been designed and constructed.

The suspension system is an important aspect of car design because it influences both the comfort and safety of passengers. Two major performance requirements of any automotive suspension system are to provide a comfortable ride and good handling when random disturbances from road unevenness and variable cargo act upon the running vehicle. Passenger comfort can be interpreted as attenuation of sprung mass acceleration or as peak minimization of sprung mass vertical displacement, while good handling can be characterized as attenuation of unsprung mass acceleration. Effort devoted to passive suspension design is ineffective because improvements to ride comfort are achieved at the expense of handling and vice versa. Instead, the best net result can be achieved by active suspension, i.e. an additional force (see Figure 1) can act on the system and simultaneously improve both of these conflicting requirements. Another important goal of the control design is to maintain robustness of the closed loop system. 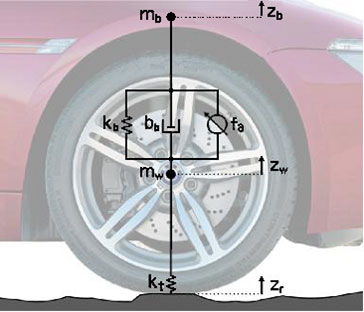 We focused largely on one-quarter- and one-half- vehicle models as control objects [3], and a one quarter-car model was developed for controller design and simulation. The model (Figure1) consists of unsprung mass mw (wheel) and sprung mass mb(vehicle body taken as one quarter of the total body mass), conventional passive suspension system (spring k1 and damper b1) and active suspension force Fa placed in parallel to the passive suspension system. “kt” represents tyre stiffness, zr denotes road displacement (disturbance), zb displacement of the body mass and zw wheel displacement. Contrary to commonly used hydraulic or pneumatic actuators [1] the research team used a unique solution – a linear electric motor controlled to obtain a variable mechanical force Fa for the car suspension. The main advantage of such a solution is the ability to generate desired forces between the wheel and the car body, giving the car sprung mass good insulation from the road surface disturbances. We learned that, under certain circumstances, the use of linear motors as actuators enables transformation of mechanical vibration energy to electrical energy, which can be accumulated in supercapacitors and used later when required. In this way, it is possible to reduce or even eliminate demand on the external power source. In contrast to traditional drives that use rotational electric motors and lead screws or toothed belts, the direct drive linear motor exhibits the property of contactless transfer of electrical power according to the laws of magnetic induction. The electromagnetic force is applied directly without the intervention of mechanical transmission. Low friction and no backlash result in high accuracy, high acceleration and velocity, high force, high reliability and a long lifetime, which enable not only effective usage of modern control systems, but also facilitate efficient control of suspension vibration.

Design of an appropriate controller is a complex issue. The research team tested commonly used high authority control concepts, such as Linear Quadratic Gaussian control, feed-forward control concept, fuzzy control as well as H-infinity robust control. Most of the proposed concepts don’t consider robustness of the controllers, although this aspect is fairly important and well-founded. For example, changes in ambient conditions can lead to changes in the dynamics of the vibration system, which can result in substantial deterioration of the feedback controller’s performance.

The same one-quarter-car configuration has been used for real experiments and verification. The mechanical configuration of the test stand is shown in Figure 2: Under the tyre there is placed another linear electric motor that uses an input experimental signal to generate road displacement (road deviations) under the running wheel. 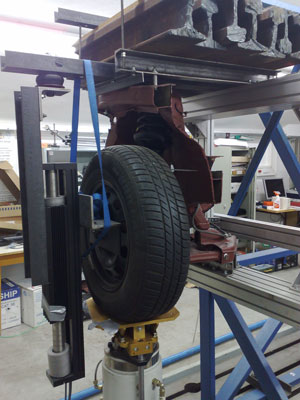 Various active suspension controllers have been developed via Matlab, implemented into dSpace and connected to the test stand system. As discussed in [2] and [3], the most satisfactory responses of the suspension system have been gained using H-infinity robust control.

This research has been supported by MŠMT project No.LN00B073 “Josef Božek’s Research Center of Combustion Engines and Automobiles and by the project “INGO LG110039”.

Please contact:
Katerina Hyniova
Dept. of Digital Design, Faculty of Information Technology
Czech Technical University in Prague
E-mail: This email address is being protected from spambots. You need JavaScript enabled to view it.