Programming language Python and company Software Improvement Group (SIG) were awarded a Dutch National ICT Award on 13 June. Both winners have their origins at CWI. Python was awarded the COMMIT/ Award for the most valuable product resulting from ICT research that is over ten years old. Python was developed in the early 1990s by Guido van Rossum, who worked at CWI at the time. The jury said that this award is a recognition of the persistent pioneering work that resulted in worldwide use of the language today. Examples of users are Google, game producers, Walt Disney and NASA. Van Rossum’s former group leader Dick Bulterman (CWI) received the award on his behalf. SIG received the ICT Milieu Award for their application energy profile register. Founded in 2000 as a CWI spin-off company, SIG received the prize for their application that determines the energy profile of software-hardware combination. The jury’s report said: “The application energy profile register has an enormous potential (…). It makes the true cost of software use visible by coupling energy meters to hardware. It initiates a thought process. This makes it the fair winner of the ICT Milieu Award 2013.” 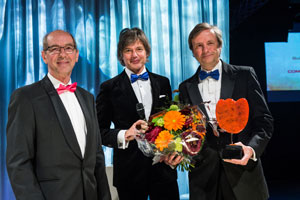