It is with great sadness that we remember Professor Michael Wilson, Scientific Computing Department, STFC, who died suddenly and unexpectedly at the end of April. Michael joined RAL (Rutherford Appleton Laboratory) in 1986 after having been a researcher in psychology at Cambridge. He led a team of researchers who worked on user interface design and visualisation of scientific data. He also worked on projects concerning knowledge-based assistance to querying and explanation, and heterogeneous distributed information systems. His work on time-based media for the web was a major contribution to the SMIL language which later became the basis for the Multimedia Messaging System (MMS) used universally on mobile phones. He was also involved in work on web ontology languages, OWL and SKOS. Later, Michael became increasingly involved in promoting science and technology, managing the UK and Ireland office of the World Wide Web Consortium and leading the communications activities for e-Science. In his most recent role Michael was on secondment to the Department of Business Innovation and Skills, leading the work of the e-Infrastructure Leadership Council Secretariat. Within ERCIM Michael was well-known as an active member of the Executive Committee and project participant, contributing greatly to financial management, governance and the change to the new structure of ERCIM. 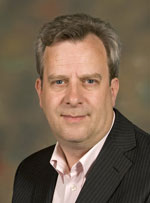 Michael will be sadly missed by colleagues. Our thoughts are with his family and friends at this time.