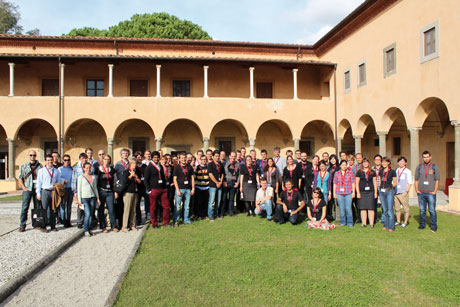 MediaEval is an international multimedia benchmarking initiative that offers innovative new content analysis, indexing and search tasks to the multimedia community. MediaEval focuses on social and human aspects of multimedia and strives to emphasize the “multi” in multimedia, including the use of speech, audio, tags, users, and context, as well as visual content. MediaEval seeks to encourage novel and creative approaches to tackling these new and emerging multimedia tasks. Participation in MediaEval tasks is open to any research group who signs up. MediaEval 2012 was the third evaluation campaign in its current form, which follows on from VideoCLEF track at CLEF 2008 and CLEF 2009.

MediaEval 2012 offered six main tasks coordinated in cooperation with various research groups in Europe and elsewhere. The following tasks were offered in the 2011 season:

The MeviaEval 2012 campaign again culminated in a workshop that was held at Fossabanda Santa Croce in Pisa, Italy from 4 to 5 October. The workshop brought together the task participants to report on their findings, discuss their approaches and learn from each other. MediaEval participation increased again in 2012 with a total of 54 papers appearing in the Working Notes, and 60 participants attending the workshop. In addition to organizer and participant presentations, the workshop features invited presentations by Jana Eggink, BBC Research and Development, London and Nicola Ferro, University of Padova, co-ordinator of the Promise Network of Excellence. The workshop concluded with a meeting of task organizers and other interested researchers that consisted of presentations and discussions of task proposals for MediaEval 2013. An exciting development of the workshop was the increasing collaborations between task participants arising from informal breakout discussions, which are now leading to further experiments with MediaEval datasets and submissions of joint papers to international conferences. The Working Notes proceedings from the MediaEval 2012 workshop have again been published by CEUR workshop proceedings.

MediaEval 2012 received support from a number of EU and national projects and other organizations including: AXES, Glocal, WeKnowIt, Chorus+, Quaero, IISSCoS, Technicolor, IBM India and CMU.

MediaEval 2013
The MediaEval 2013 campaign is currently in progress and participants will be presenting results of their work at the MediaEval 2013 Workshop in Barcelona from 18 to 19 October, just before the ACM Multimedia 2013 conference.

Further details of MediaEval are available from the MediaEval website.

Please contact:
Martha Larson, TU Delft, The Netherlands
Tel: +31 15 278 5812, E-mail: This email address is being protected from spambots. You need JavaScript enabled to view it.