The current evolution of pervasive technologies means that traditional access modalities are not always suitable for a particular service and, consequently, need to be reassessed. There are many scenarios in which the user is unable to use a screen or keyboard to interact with a given service. In such cases, a vocal interaction can be useful, but this is only supported by a few application providers. We propose a solution to adapt existing Service Front Ends in order to support vocal interaction, which is based on reverse engineering, adaptation heuristics and automatic generation of the vocal implementation.

Pervasive environments imply the possibility of accessing interactive applications anywhere and anytime. There are times, however, when a user may need to access a service but is involved in tasks that occupy his or her hands, making it impossible to use a screen or keyboard. The vocal modality is a good candidate for service access in these situations, and this is confirmed by the recent effort dedicated to supporting it by the main players in mobile OS (eg iOS and Android).

Though supporting vocal interaction can be a good opportunity for service providers, the creation of a Service Front End (SFE) for an additional modality requires an effort that not all application developers can afford. Our approach addresses this issue by supporting the automatic adaptation of existing Web SFEs to the vocal modality.

Our solution is based on an adaptation server, which is able to produce a VoiceXML SFE taking as input its HTML+CSS implementation. The final result adapts the hierarchical information structure of the initial SFE, by including menus that facilitate vocal navigation of the content and remove elements not relevant for the vocal rendering. Both input and output techniques are also adapted so that they can be supported by the vocal modality. In this process we exploit the MARIA language, which provides an abstract SFE language (with a vocabulary independent of the interaction modality) and a set of concrete SFE languages in which the abstract vocabulary is refined taking into account the target interaction platform.

The adaptation process consists of three main steps, implemented by the following modules:

Since the adaptation is performed on the logical SFE descriptions it is independent of the implementation languages. In addition, the adaptation process can be customized by SFE designers through a tool that allows a set of parameters to be changed (eg the maximum number of items in a vocal menu). The menu structure that will be generated can also be previewed and updated when a parameter has been changed.

Figure 1 shows an example of the desktop-to-vocal SFE adaptation on the BBC News site. The left part represents the original page layout. The adaptation process identified a set of different groups, which are highlighted with the red boxes. It then created the navigation structure, shown in the right part of the figure. The text within the boxes shows the words the user has to pronounce in order to move to the corresponding section. Finally, each page element is transformed into its vocal counterpart. 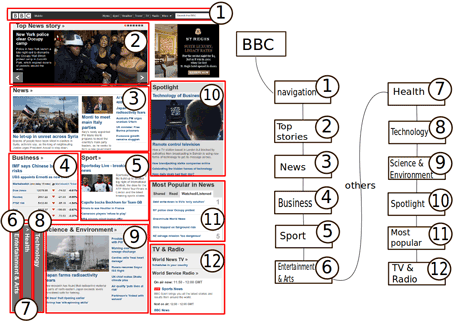 The resulting application will start asking the user to choose between the first set of parts in the BBC homepage (Navigation, Top stories, News, Business, Sport, Entertainment & Arts) or others. If, for instance, the user says "others" then the remaining parts of the page will be listed (Health, Technology etc). If the user says "News", the application will start reading the latest news included on the BBC website. The user is always able to go back to the previous menu, restart the navigation or exit the application by pronouncing the words "Back", "Previous" or "Exit", respectively.

We have presented a solution to make Web pages more suitable for vocal browsing by analyzing and modifying their logical structure. A customization tool was also developed in order to interactively change the parameters of the adaptation process and have a preview of the structure of the generated vocal application.

Please contact:
Fabio Paternò
ISTI-CNR, Italy
E-mail: This email address is being protected from spambots. You need JavaScript enabled to view it.