Jan Karel Lenstra was named Knight in the Order of the Netherlands Lion on 4 November 2011. This happened during the symposium on the occasion of his resignation as general director of CWI. The royal decoration is awarded to citizens with outstanding achievements in the field of arts, science, sports or music. The former CWI director was praised for his pioneering and influential scientific achievements in mathematics, and for his efforts for the scientific community. He introduced successful new lines of research during his directorship, such as cryptology and life sciences, and was able to attract very talented researchers. In gratitude for his efforts, CWI management recently decided to appoint Lenstra as a CWI Fellow. Lenstra was general director of CWI from 2001 to 2011 and remains affiliated to CWI, where he will focus on research and administrative duties. Jan Karel Lenstra represented CWI on ERCIM’s Board of Directors from 2004 to 2011 and was Vice-President of ERCIM from 2005 to 2009.

During the Chilean technology transfer week in October 2011, the Chilean economic development agency CORFO announced that Inria’s project to create a research and innovation centre had been selected as part of a programme for the creation of “international centres of excellence for competitiveness” in Chile. The “Communication and Information Research and Innovation Center” (CIRIC) will allow scientists from different fields to work closely together and provide a support structure for technology transfer. It will make it possible to introduce a research and development culture into universities in partnership with business, in order to support Chile’s competitiveness in computational science and technologies, particularly through the creation of spin-offs and technology transfer to large companies and SMEs.

A research group from the Institute of Information Theory and Automation (UTIA-CRCIM) won the prestigious Czech Republic scientific award - the Award of the Academy of Sciences of the Czech Republic for outstanding results of major scientific importace. The team lead by Prof. Michal Haindl consisting of Jiří Filip, Jiří Grim, Vojtěch Havlíček, and Martim Hatka was awarded for the scientific outcome of “Mathematical modeling of visual properties of surface materials”. A short article about this research was published in ERCIM News no. 81 (http://ercim-news.ercim.eu/en81/special/realistic-material-appearance-modelling). The award was handed to the researchers by the president of the Academy of Sciences of the Czech Republic Jiří Drahoš in a ceremony on 22 September 2011 in Prague. 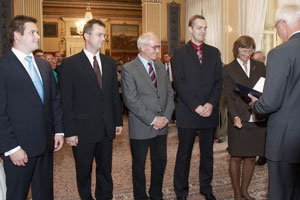