The exercise was organized in the context of the POSEIDON project “Earthquake followed by Tsunami in the Mediterranean Sea” co-funded by DG ECHO, and provided a unique opportunity to validate new applications for early warning and communications systems as well as procedures by which to inform the public of emergency measures to be undertaken in a disaster scenario based on the tsunami of 365a.d. (Flouri et al., ERCIM News 81). 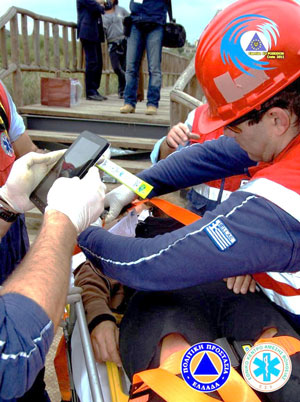 During the civil protection exercise

SMS/Twitter messages for public awareness alerts/warnings were evaluated in terms of understandability, credibility, usability and usefulness by exercise participants. SMS in different languages included URLs to information resources, risk and resource location maps, as well as alert messages in the Common Alerting Protocol (CAP ITU-T X.130). CAP messages reported on the pending tsunami and the status of the disaster in an interoperable format also used by GDACS. Similar messages on Twitter allowed team leaders, observers, and media to follow the progress of the exercise from their smartphones delivering a high-level log of the exercise.

Following a disaster, time is the most critical resource in the management of emergencies. There are large numbers of unidentified victims or people missing. At the Coordination Centres, timely information is needed to assess the situation, weigh options and engage the limited means and resources in the most effective manner. In the field prompt triage of victims (<30 seconds per victim), seamless identification and tracking from rescue to hospital or shelter, are of paramount importance.

e-Triage, an innovative technology developed by FORTH-ICS in collaboration with EMS-Crete combined the START protocol on smartphones held by rescuers with colour-coded triage cards with QR codes, to meet these requirements. In EU POSEIDON 2011, e-Triage was used by rescuers on realistic cases involving more than 70 victims played by volunteers in Chania and Heraklion.

Victims were located by rescue dogs and retrieved by firefighters and rescue teams. Trained rescuers performed protocol-based e-Triage and provided the victims with a bracelet marked with a unique QR code, a “Green”, “Yellow”, “Red”, or “Black” sticker and a letter indicating the affected body system. According to the START protocol, “Green” victims were transferred and checked-in to the “Lightly Wounded-Walking Area” managed by the Hellenic Read Cross, “Black” victims were transferred and checked-in to the “Dead or Expected Area” managed by the Hellenic Police, while “Red” and “Yellow” victims were checked in the on-site “Field hospital” managed by the EMS. The medical personnel in the Field Hospital carried out 2nd level triage in 3-5 minutes, ie collected additional information on the victims and performed medical intervention as needed. At the same time, they placed requests for ambulances and dispatched victims based on severity.

The technical infrastructure supporting e-Triage was a local WiFi network connected to the EMS Coordination Centre by secure GSM or satellite network connectivity. Disconnected operation was supported by local Web and Database servers. Thus, the disaster area simulated a WiFi bubble resilient to possible fluctuations or loss of Internet connectivity for the eTriage applications on netbooks, tablets or smartphones. If Internet connectivity was present, replication of the local database to the EMS database was performed at preset intervals (three minutes). Skype communication from the local coordination centre, the different areas, and the EMS coordination centre was also used if Internet was available.

In the absence of Internet connectivity, VHF radio was used to report a summary of the situation to the EMS coordination centre including number of victims in different areas. As soon as Internet connectivity was restored, the applications were resynchronized. Thus, e-Triage proved very effective in supporting coordination and cooperation, bridging information gaps along the chain of emergency management, offering an innovative approach to the very demanding setting of disaster management.

Please contact:
Catherine Chronaki, FORTH-ICS, Greece
E-mail: This email address is being protected from spambots. You need JavaScript enabled to view it.