Jan Karel Lenstra was named Knight in the Order of the Netherlands Lion on 4 November 2011. This happened during the symposium on the occasion of his resignation as general director of CWI. The royal decoration is awarded to citizens with outstanding achievements in the field of arts, science, sports or music. The former CWI director was praised for his pioneering and influential scientific achievements in mathematics, and for his efforts for the scientific community. He introduced successful new lines of research during his directorship, such as cryptology and life sciences, and was able to attract very talented researchers. In gratitude for his efforts, CWI management recently decided to appoint Lenstra as a CWI Fellow. Lenstra was general director of CWI from 2001 to 2011 and remains affiliated to CWI, where he will focus on research and administrative duties. Jan Karel Lenstra represented CWI on ERCIM’s Board of Directors from 2004 to 2011 and was Vice-President of ERCIM from 2005 to 2009. 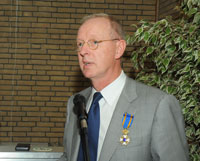