by Flemming Nielson and Ender Yüksel

The third annual meeting of the ERCIM Working Group on Models and Logics for Quantitative Analysis (MLQA) took place on Monday 5 September 2011 as part of the 22nd International Conference on Concurrency Theory (CONCUR 2011) organized by the RWTH Aachen University in Germany. More than twenty researchers, from senior researchers to PhD students, attended this meeting.

The theme of the meeting was the role of continuous modeling and analysis techniques in computer science and applications. Traditionally, continuous domains have been used systematically in quantitative modeling and analysis, in the form of time, probability, etc. The focus of the MLQA meeting, instead, was on issues like continuous approximations of population sizes, ordinary differential equations (ODEs), semantics of stochastic process calculi or other languages, and ODE limits of Markov Chains.

The first talk, by Professor Jean-Yves Le Boudec, explained the meaning of basic concepts such as "mean field approximation", "fluid approximation", "fixed point method" and "decoupling assumption". Relating these concepts to ODEs and explaining how fast simulation methods can be derived, Professor Le Boudec showed that mean field approximation and fluid approximation are generally valid whereas the fixed point method and the decoupling assumption require more care and may not hold even in simple cases. This talk was followed by two talks that focused on the relationship between ODEs and stochastic process algebras, by Professor Jane Hillston and Dr. Luca Bortolussi. Professor Hillston discussed the recent work on population-oriented models described in stochastic process algebras and interpreted as a set of ordinary differential equations, the so-called fluid approximation. Dr. Bortolussi concentrated on the mathematical foundations of the fluid-approximation of stochastic process algebra models and discussed various related issues including extensions of the limit theorem. 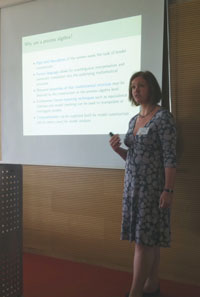 In her talk on the approximation of continuous space systems and associated metrics and logics, Professor José Desharnais surveyed approximation techniques for Labelled Markov Processes - a model of probabilistic processes where the state space is a measure space. Professor Desharnais showed that they obtained a practical approximation by aggregating states that share some similarities.

Professor Flemming Nielson convened a small thematic working group on Hidden Markov Models. The aim of this initiative was to identify researchers that would be interested in developing logics, query languages, and model checkers that would be able to deal with some of the applications of Hidden Markov Models. The efforts in this area would hopefully lead to useful tools in much the same way that existing stochastic model checkers perform the analysis of Markov Processes. 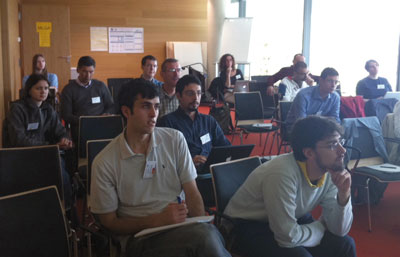 Concentration and attention during the talks

For more information please consult the MLQA wiki where most of the presentations are available and where details of the next meeting in 2012 will be posted as well as the plans for further stimulating interaction among members of the working group.