The current “target-rich and lead-poor” scenario in drug discovery, together with the massive financial resources required to develop a new drug, mean that new approaches and renewed efforts by researchers in academia are required, in particular in the area of neglected and rare diseases. Virtual screening and volunteer computing are extremely useful tools in this fight, and together have the potential to play a crucial role in the early stages of drug development. From a social and economic point of view, amyloid neurodegenerative diseases, including Alzheimer´s, Parkinson´s, familial amyloid polyneuropathy and several others, currently represent important targets for drug discovery. Here, we provide a short account of our current efforts to develop new compounds with anti-amyloid potential using a volunteer computing network.

Transthyretin Amyloid
Despite recent advances in our understanding of biological systems, the discovery and development of a new therapeutic agent is still a slow, difficult and very expensive process. This is mainly due to the low success rates associated with finding the “magic bullet” for a given biological target. Computational methodologies play an increasing role in drug discovery but, due to limitations of the approximations used, it is clear that a “one recipe fits all” approach is far from suitable.

At the Structural and Computational Biology group of the Center for Neuroscience and Cell Biology, University of Coimbra, we devised a research program to find new lead compounds for the treatment of amyloid diseases, in particular, familial amyloid polyneuropathy (FAP), a genetic neurodegenerative disease that is prevalent in Portugal and with other foci around the world. Known as a highly impairing disease, it is characterized by loss of sensation to temperature and pain in the lower limbs during its early stages, later evolving to muscular weakness and general autonomic dysfunction. The only effective treatment known to date is liver transplantation, since the liver is the main site of synthesis of the protein transthyretin, the causative agent of FAP.

Transthyretin (TTR) is a protein of the blood plasma known to bind and transport the hormone thyroxine. The cytotoxic role of TTR on the peripheral nerves involves the formation of amyloid aggregates and amyloid fibrils through a series of molecular events, whereby the protein dissociates, partially unfolds and aggregates. These events can be modulated by the binding of thyroxine-like molecules to the two binding pockets of TTR. Several of these small molecules have been shown to stabilize the protein and thereby decrease or even prevent amyloid formation, but in general they are associated with undesirable side effects, low solubility, and/or inability to strongly bind TTR in the plasma. However, a Phase III clinical trial has recently been concluded with one of these molecules, with very promising results. 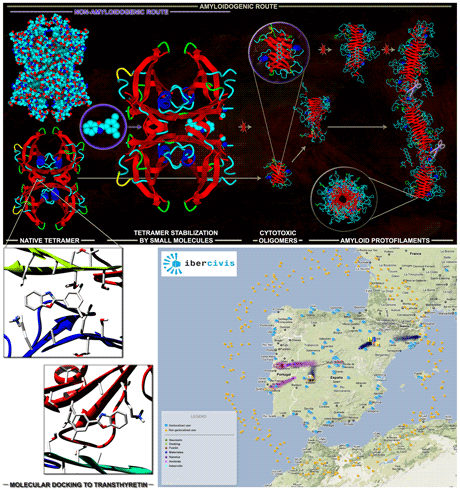 Virtual Screening and Volunteer Computing: the AMILOIDE-Ibercivis project
In order to search for new lead compounds capable of stabilizing the native form of TTR, we envisaged a rigorous computationally-driven search to minimize the occurrence of false positives. Multiple combinations of docking algorithms and scoring functions were validated by assessing the software’s ability to reproduce the binding mode of known TTR binders in experimental X-ray structures. Docking algorithms such as AutoDock4, FRED, eHiTS and GOLD were tested, along with their in-built and additional scoring functions. For TTR, the combination of AutoDock4 with a scoring function called DrugScore-CSD produced the most reliable results.

In parallel, restricting “chemical space” to a biologically relevant and synthetically accessible set of molecules is an essential step in a Virtual Screening (VS) campaign. We have generated a tailored library of 2,259,573 compounds by filtering an initial collection of approximately 11 million molecules deposited in the ZINC database. The filtering process involved combining rules for bioavailability with our knowledge of the physico-chemical properties of the known TTR stabilizers. However, the docking of approximately 2.3 million compounds to TTR on a single desktop computer would take about 43 years of CPU time.

The AMILOIDE project takes advantage of the expansion of the Ibercivis network to Portugal, implementing AutoDock4 on a large-scale volunteer computing platform. Powered by the BOINC middleware, Ibercivis was initially developed at the Institute for Biocomputation and Physics of Complex Systems, University of Zaragoza, and it is guided by two main objectives: i) to provide an easily operable distributed computing platform available to multiple scientific projects; ii) to provide a science communication forum where citizens and scientists may interact.

In AMILOIDE-Ibercivis, each BOINC Work Unit is comprised of one TTR receptor structure with its respective 3D maps of atomic affinity, one ligand structure, and docking parameter files. The Work Units are sent to the network clients where AutoDock4 carries out the calculations. When these are concluded, the results are sent back to one of the Ibercivis servers and later transferred to the researchers’ machines for analysis. Here, the predicted complexes of TTR are submitted to rescoring with DrugScore-CSD. The most promising molecules are purchased and tested experimentally for activity.

During the period between October 2009, when the first production Work Unit of the AMILOIDE-Ibercivis project was launched, and May 2010, all 2,259,573 Work Units were sent out to BOINC clients on Ibercivis. Of these, approximately 80% have been successfully returned. This represents an average validation rate of 8,600 Work Units per day, or 258,000 Work Units per month. Client errors are mostly due to aborted jobs (74%), followed by computation errors (23%). Download errors account for only 3% of the failures. The computing performance of this experiment is staggering: the Ibercivis platform provided the AMILOIDE project with over 350,000 hours of CPU time during the first seven months of execution.

Please contact:
Rui M. M. Brito
Center for Neuroscience and Cell Biology, University of Coimbra, Portugal
E-mail: This email address is being protected from spambots. You need JavaScript enabled to view it.