Vector-borne diseases are illnesses that are characterized by the transmission of infectious agents between humans via the bites of arthropod vectors, most prominently mosquitoes. It is hoped that recent scientific advances, especially in the areas of high throughput biological research and bioinformatics will assist in alleviating the global burden caused by these diseases.

Vector-borne diseases have been central in shaping human history by playing a crucial role in events such as the siege of Syracuse, and the death of prominent leaders, such as Alexander the Great. More than one million deaths annually, resulting from hundreds of millions of cases, can be attributed to malaria alone, which, in spite of considerable efforts, still represents one of the menaces faced the poorest populations in the tropics. The fight against this disease is hampered by increasing resistance exhibited by both Plasmodium, the malaria parasite, against drugs, and by vector anopheline mosquitoes against insecticides used for public health purposes. Moreover, the lack of vaccines and the less-than-perfect infrastructure in the countries most affected have not helped improve the situation. Nevertheless, the advent and expansion of molecular biology and genomics over the last decade has provided new knowledge on all three "partners" of the vector-borne diseases (human, pathogen and vector). Combined with the recent research boom in bioinformatics, this knowledge could potentially be put to use for the development of specific tools that might help control the diseases. The potential eradication of malaria, a notion that was abandoned 40 years ago, is now being discussed again as a possibility. 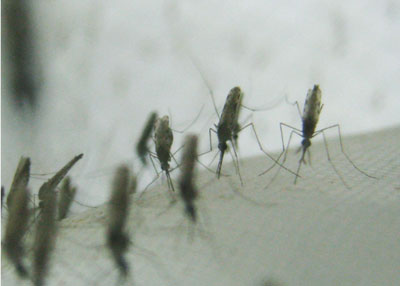 Mosquitoes from an Anopheles gambiae laboratory colony, "resting" in the authors' laboratory.

In the frame of this enhanced effort to fight vector-borne diseases our group has joined several international networks that share the same goals, most notably the BioMalPar and its successor EVIMalaR, both Networks of Excellence in the frame of the FP6 and FP7 programmes of the European Union, and the VectorBase (VB; PI: Frank Collins, University of Notre Dame) project funded by the National Institute of Allergy and Infectious Diseases of the USA. While the European networks concentrate on "bench" biological research, the latter is a dedicated bioinformatics project that is responsible for the development of a comprehensive database of genetic, genomic and other bio-data that are pertinent to disease vectors. The key contents of VB include the genomic sequence information on several vectors, first of which is Anopheles gambiae, the most important malaria vector in Africa. Additional information hosted by VB includes, among others, data on gene expression, specific bioinformatics tools and a section on insecticide resistance, IRBase (see below), which was constructed by the Cretan team. In addition to these, VB is also the home of a set of ontologies, all in OBO format, that describe different aspects of vector-borne diseases, which are the main focus of interest of the IMBB group in the frame of VB. These can be used to promote interoperability between databases and facilitate complex queries in different but related datasets.

The first two ontologies to be built were those relating to the anatomy of mosquitoes (TGMA) and of ticks (TADS), both species groups that include several major vectors. These ontologies were primarily constructed in order to help the annotation of biological experiments dealing with these species. The next ontology developed, MIRO, covers the domain of insecticide resistance, a feature that is of extreme importance for the control of both agricultural pests and disease vectors. In the frame of VB, MIRO drives IRBase, the corresponding database, which collects data supplied by both individuals and organizations such as the World Health Organization, with the aim of making them freely available to the worldwide community of field entomologists and public health workers. Finally, a large malaria ontology (IDOMAL) is also part of the VB effort. This, developed in the frame of the international consortium IDO that works on the construction of a top-level infectious disease ontology, is the first step in an ambitious plan to construct ontologies for all major vector-borne diseases such as African and American trypanosomiasis, lymphatic filariasis, yellow fever and more.

The common thread between all ontologies that are being constructed de novo is that all follow the rules set by the OBO Foundry, a loose collaboration between teams developing open biological ontologies. Moreover, we build our ontologies on the format laid down by BFO, the basic formal ontology. Both of these conditions guarantee the maximum of interoperability and orthogonality, thus enhancing their usability.

In addition to the "classical" potential usage of our existing and new/forthcoming ontologies in driving databases, their availability under the criteria briefly described make it possible to use them in more practical ways, for example, in driving epidemiological decision support systems. Given the state of public health in most third world countries, we believe that a functional improvement based on bioinformatics tools such as the specialized ontologies on which we work is a practical way to help the poverty-stricken populations of the tropics.

Please contact:
Christos Louis
IMBB-FORTH, Greece
Tel: +30 281 039 1119?
E-mail: This email address is being protected from spambots. You need JavaScript enabled to view it.