With their interdisciplinary background and interest in nonlinear process systems, the Process Control Research Group at Computer and Information Research Institute Hungarian Academy
of Sciences carries out research in modelling, analysis, representations and control of reaction kinetic systems, and their application in systems biology.

The modelling and analysis of signalling pathways in living organisms is one of the most challenging problems in systems biology that can be handled using the theory of chemical reaction networks (CRNs) obeying the mass-action law. In addition to being used to describe pure chemical reactions, such networks are also widely used to model the dynamics of intracellular processes, metabolic or cell signalling pathways. This model class enables the use of the deficiency-based, multi-stability-related results of Martin Feinberg et al., which provide very strong theorems about qualitative behaviour of the modelled system, based only on the structure of the reaction network, independently of its parameters.

In the case of reaction kinetic models, we consider a system of n chemical species participating in an r reversible steps reaction network. For graphical representation of the kinetic system, reaction schemes can be used, which describe the structure of the enzymatic and non-enzymatic reactions in a compressed way (not depicting every single reaction). Reaction schemes can be depicted in mathematical terms using hypergraphs, where the edges may be adjacent to more than two vertices. The vertices of a reaction scheme correspond to the non enzymatic complex type components, while the hyper-edges describe chemical reactions (not necessarily reaction steps). An enzyme-catalytic reaction corresponds to a pair of hyper-edges with different directions, both adjacent to three components S, P and E (substrate, product and enzyme, respectively). An example of a reaction scheme is shown in Figure 1. 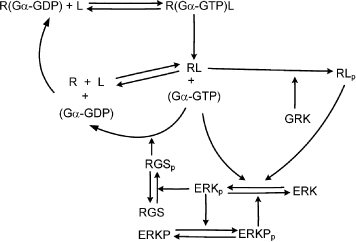 One recent project in which CNRs have been applied to biological systems is the modelling of rapid (G protein coupled) and slow (β-arrestin coupled) transmission. Until the 2000s the most widely accepted classic paradigm of signalling, related to G protein coupled receptors, hypothesized that the most important elements which contribute to information transfer to the internal system of the cell are the a and bg subunits of G proteins. In recent years, it has been shown that, in addition to taking part in receptor desensitization and attenuation of G protein coupled signalling,
β-Arrestins also form an endocyctic protein complex. This complex initiates a G protein independent transmission and regulation of extracellular regulated kinase (ERK), an important kinase thatplays a central role in the intracellular signalling network (ERK is also activated by G protein coupled pathways). The recognition that a single receptor acts as a multiple source of signalling pathways, and various drugs binding to this receptor, might differentially influence each pathway (in contrast to pathway-specific drugs), led to the reassessment of the efficacy concept. These recent biological findings led to the concept of a dynamical model, capable of describing the interactions of the two convergent, but qualitatively different signalling mechanisms.

In cooperation with the Neuromorpho-logical and Neuroendocrine Research Laboratory of the Department of Human Morphology and Developmental Biology (Hungarian Academy of Sciences and Semmelweis University), we have developed a simplified dynamic model that describes the dynamic behaviour of G protein signalling. The model takes into account the effect of slow transmission, RGS mediated feedback regulation and ERK-phosphatase mediated feedback regulation. The parameters of the model have been determined via numerical optimization.

The proposed reaction kinetic model, depicted in Figure 1 as a reaction scheme, gives rise to an acceptable qualitative approximation of the G protein dependent and independent ERK activation dynamics that is in good agreement with the experimentally observed behaviour (see Figure 2). 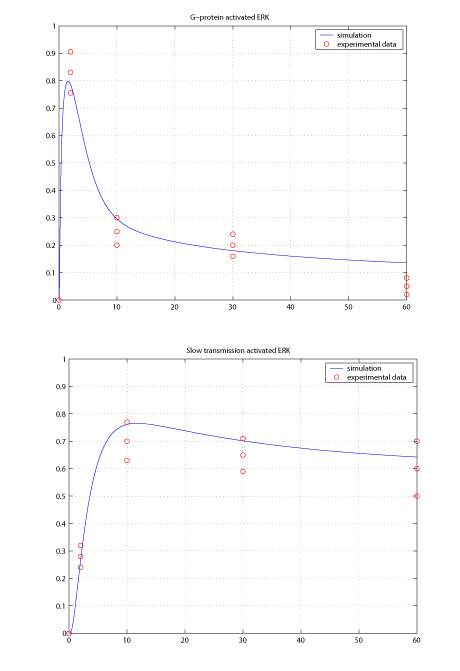 The developed and validated model could potentially be applied to disorders of the reproductive neuroendocrine system. In cases of polycystic ovary syndrome for instance, treatment may include administration of the key hormone GnRH (which acts via G protein coupled receptors) or its analogues. The importance of slow transmission is also becoming evident in other areas of physiology and medicine, for example recent studies suggest that ?-arrestins may play a central role in diabetes mellitus and insulin resistance.

Please contact:
Dávid Csercsik
SZTAKI, Hungary
Tel: +36 1 279 6163
E-mail: This email address is being protected from spambots. You need JavaScript enabled to view it.

Gábor Szederkényi
SZTAKI, Hungary
Tel: +36 1 279 6163
E-mail: This email address is being protected from spambots. You need JavaScript enabled to view it.

Katalin M. Hangos
SZTAKI, Hungary
Tel: +36 1 279 6101
E-mail: This email address is being protected from spambots. You need JavaScript enabled to view it.