As antibiotic resistance continues to be a major problem in the health-care sector, research has begun to focus on different methods of treating resistant bacterial infections. One such method is called the β-lactamase-dependent pro-drug delivery system. This involves delivering inactive precursor drug molecules that are activated by the same system that normally confers resistance on bacterial cells. In theory this approach seems very promising as it would exploit one of the bacteria's main resistance strategies. However, the complex system dynamics involved are difficult to understand by straightforward experimental observations. Therefore, new computational models and tools are needed to analyse the complex system dynamics involved in this approach to treating antibiotic resistant bacteria such as MRSA. We give an overview here of our work in this area.

A computational model has been developed previously, called Micro-Gen, which simulates the growth of bacterial cells in culture and their interactions with anti-microbial drug molecules. The program uses an agent-based modelling approach whereby the individual bacterial cells are represented by unique software agents that are capable of flexible, autonomous action within a simulated environment. The agent-based approach means that the system as a whole can exhibit a complex behaviour that is more than the “sum of its parts”. This approach allows the unique dynamics within a bacterial colony to be simulated by taking into account subtle differences within a population or across an environment.

Micro-Gen has been used in previous studies to examine the resistance mechanisms involved in the response of bacterial populations to antibiotic treatment. Studies showed that it could accurately predict the minimum inhibitory concentrations (MIC, a simple laboratory measure of antibiotic efficacy) for various common antibiotics, including penicillin G and cephalothin, against methicillin-resistant Staphylococcus aureus (MRSA) bacteria. However, an important strength of the model is that it can be used to examine new approaches for treating antibiotic-resistant bacteria and give insight into potential novel drug treatment strategies. This can aid in rational drug design by allowing a greater understanding of the underlying mechanistic principals determining response to treatment.

Recent research has focussed on adapting the existing model to explore a novel approach to treating antibiotic-resistant bacteria called the β-lactamase-dependent pro-drug delivery system. This approach involves administering a substrate-like pro-drug molecule that contains a β-lactam ring structure (a structure contained in many common antibiotics including penicillin and its derivatives). The presence of a β-lactam ring structure means that the pro-drug effectively mimics a normal antibiotic, such as penicillin, and is susceptible to cleavage by β-lactamase enzymes released from antibiotic-resistant bacterial cells. However, this cleavage does not result in the destruction of the drug (as is the case with the antibiotics) but instead triggers the selective release of a molecule with anti-microbial properties that kills or inhibits the growth of the bacterial cells.

This is considered a promising therapeutic approach because many bacterial species have evolved to produce β-lactamase enzymes in response to prolonged clinical exposure to β-lactam antibiotics. The bacterial cells produce β-lactamase enzymes as a defence mechanism because the enzymes cleave the β-lactam ring structure present in the antibiotic molecules, rendering them inactive. In the USA, it is estimated that greater than 95% of all S. aureus bacterial isolates possess resistance to penicillin, due to the expression of β-lactamase. Therefore, by designing pro-drugs that specifically target these bacteria it would introduce an evolutionary selective pressure contrary to that of existing β-lactam antibiotics.

The dynamics between the negative evolutionary selective pressure from pro-drugs and positive selective pressure from β-lactam antibiotics would be an important factor to consider when assessing the possible evolution of drug resistance in bacteria in response to these two different therapeutic strategies. However, the complex interplay of biophysical, pharmacokinetic, pharmacological and epidemiological factors that would contribute to this is difficult to predict. Therefore it is important to develop novel modelling approaches that can be used to analyse the complex system dynamics involved and to develop theories that can then be tested in the lab. That is the purpose of our research: to develop new models that may be suitable to approach this problem.

A detailed description of the Micro-Gen model is beyond the scope of this article, but for further information the reader is directed towards the publication list on our website (see link) documenting the overall program structure along with an analysis of the mechanistic basis for its output. Micro-Gen is an agent-based model, which means that it represents the system from the bottom-up, looking at the individual components of a population and how their interactions contribute to the overall “emergent” dynamics of a population. In this case, the individual bacterial cells are represented by software agents that store physical traits such as their energy state or amount of antibiotic damage. The agents also have behavioural rules associated with them that dictate their actions during the simulation. The environment of the simulations is represented by a discrete, two-dimensional grid containing diffusible elements such as nutrients, β-lactamase enzymes and the anti-microbial (pro-)drug compounds. 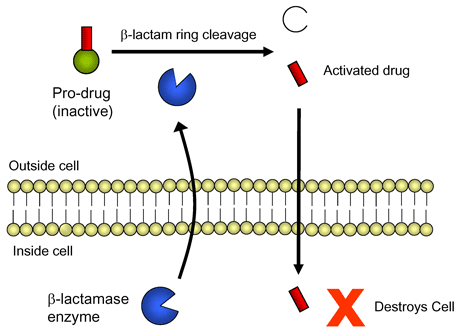 Figure 1: Simple schematic representation of activation of pro-drug molecule as a result of cleavage by a β-lactamase enzyme (blue) released by the bacterial cell. Activation results in the release of the active anti-microbial component (red) which enters the cell and destroys it.

The key interaction of the model that determines the response to pro-drug treatment is the reaction between the β-lactamase enzyme and the pro-drug (see Figure 1). This reaction is the activation step that triggers the release of an active drug compound. The success of the pro-drug approach requires the rapid and specific release of the active drug compound in the vicinity of the bacterial cells. The model contains a quantitative representation of this reaction based on Michaelis-Menten kinetic theory.

It is early days in the research of pro-drug compounds and only limited laboratory data is available. However, the power of the computational approach for elucidating the mechanisms of action of novel drug compounds can be an important asset to have. In conjunction with laboratory testing, important insights can be made into the complex interplay of the different components in the pro-drug delivery system using an agent-based modelling approach. Initial testing with our own model has involved carrying out simulations based on data from real-life pro-drug candidates in order to compare the model output to experimental results (in press). This has demonstrated its usefulness in providing an integrated understanding of the unique dynamics of the pro-drug delivery system in order to assess its effectiveness as a viable alternative treatment strategy for microbial infectious diseases.