Graph transformation approach for consolidation of creativity sessions results is part of the FP7 EU/IST project idSpace: Tooling of and training for collaborative, distributed product innovation. The goal of graph transformation approach is to provide a tool for merging results of various sessions (such as brainstorming sessions), which are represented as graphs, when the session participants- are physically distributed.

Creativity is a mental and social process involving the discovery of new ideas or concepts, or new associations of the creative mind between existing ideas or concepts. It has been studied from various perspectives including behavioural psychology, social psychology, psychometrics, cognitive science, artificial intelligence and philosophy. Elicitation of such ideas is usually supported by one or more so called “creativity techniques” which are usually performed in a group.

New product development usually does not end with one session. It typically consists of several sessions performed with several participating teams in different geographical locations. This is especially relevant in situations in which a new product needs to be assembled from components of physically distributed suppliers within a supply chain. As there are usually multiple models resulting from several sessions, there is a natural requirement to consolidate the results with electronic support.

The idSpace project started in April 2008 and finished in March 2010. The idSpace project aims to provide a web-based platform which supports the distributed creative sessions and ideation. The results of ideation sessions are represented as graphs. The follow up processing requires consolidation of the results into a unified model. As the graph structure is adopted, the consolidation can be done with the help of series of graph transformations. Graph transformations are used to represent merge, subtract and replace operations.

The web based tools (see Figure 1) are based on lightweight portlet technology, which is based on Liferay Portal Technology. This method integrates sketch editor for free drawing in ideation sessions, idea editor for preserving ideation results based on MxGraph software, statement portlet for association label suggestions according to chosen creativity technique, portlets for graph transformations (merge, subtract, and replace buttons in Figure 1) and other portlets realized by different members of the idSpace consortium. The idSpace consortium consists of Open University of the Netherlands, Aalborg University, University of Cyprus, Landesinitiative Neue Kommunikationswege Mecklenburg- Vorpommern e.V, University of Pireaus Research Center, University of Hildesheim, Morpheys Software, Space Applications, and Extreme Media Solutions. 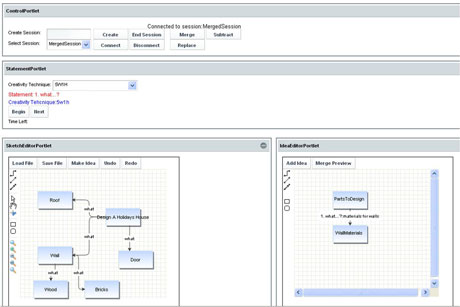 The idea behind creativity techniques is to encourage lateral thinking, because it is a common human behavior to stick to one line of thought that may be preferred at first glance. This line of thought is steared by the statements, guidelines, and questions from the creativity techniques. Each generated idea (as for example in Figure 1) can be connected to another by an association with a label taken from the set of 5WH1 questions (labels on edges in Figure 1 for example). This can be modeled as graph. Further, each idea represented as a node can be supported by a sketch drawn in a sketch editor. Once a group is finished with the idea graph, a consolidation session might be called upon where the graph transformation of existing graphs, including the one generated in the latest session, are employed to achieve a final agreed upon suggestion for a solution.

The benefit of such an approach is that teams get user-friendly support for consolidation and preservation of the creativity session results. The results are far more than just snapshots of white boards; they can be used for later processing, such as automatic discovery of hidden implicit relations between ideas, recommendations of related existing ideas, guiding through an information space of ideas and so on. As a consequence more people are able to contribute ideas, to manage creativity and its results more transparently and efficiently, and to benefit from previous knowledge constructed in other creative sessions.

Please contact:
Peter Dolog
Aalborg University, Denmark
E-mail: This email address is being protected from spambots. You need JavaScript enabled to view it.