In April, Peter Grünwald (CWI and Leiden University) and Harry van Zanten (Eindhoven University of Technology and EURANDOM) received the Van Dantzig Prize, the highest Dutch award in statistics and operational research. The prize is awarded every five years by the Netherlands Society for Statistics and Operations Research (VVS-OR) to a young researcher who has contributed significantly to developments in these research areas. 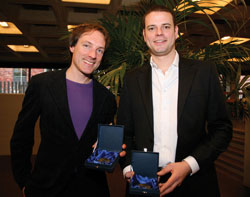