by Roger Kahn, Ronen I. Kat and Carlos Pratt

The architecture of a storage server differs from a computing server. In addition to the computing resources (eg processor, memory) found in a computing server, a storage system has internal storage networks and a large number of storage devices, currently disk drives. A large portion of the energy is consumed by these disk drives, primarily by their mechanical spindle motors.

In April 2009, the Storage Networking Industry Association (SNIA) released a first draft for public review of the ‘SNIA Green Storage Power Measurement Technical Specification’. The draft focuses mainly on the idle energy consumption portion of storage systems. In addition, the draft has a comprehensive taxonomy that helps the user to map energy consumption of storage systems based on capabilities and workloads.

The Storage Performance Council (SPC) recently released the SPC-1C/E benchmark toolkit, which can drive storage systems with up to 48 storage devices, either solid-state drives (SSDs) or disk drives. The SPC-1C/E workload simulates an online transactional processing (OLTP) environment and shows the correlation between performance and energy consumption. 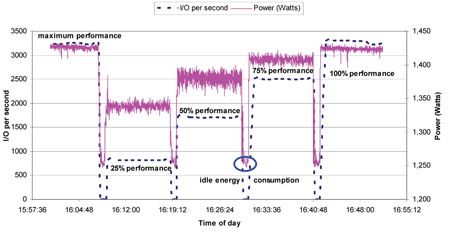 For more details on SNIA and SPC benchmarks see the links provided at the end of this article.

The goal of the energy benchmarks in development is to demonstrate a correlation between the user workload and the storage energy consumption and hence help design energy-proportional storage systems. Our work on storage benchmarks began in 2007 and is performed by IBM’s Haifa Research Lab and Tucson performance lab. Future activities include refining models that will aid in the deployment and design of energy-proportional storage systems, and determining how they will affect the bottom line of the customer.

Ronen I. Kat
IBM Haifa Research Lab
Tel: +972 3768 9493
E-mail: This email address is being protected from spambots. You need JavaScript enabled to view it.

Carlos Pratt
IBM Tucson Arizona
Tel: +1 520 799 5409
E-mail: This email address is being protected from spambots. You need JavaScript enabled to view it.