In November 2005, the Irish government presented its ‘Transport 21’ plan for the future of transport infrastructure in Ireland. The largest prospective capital investment to date in Ireland and occurring under the auspices of the National Development Plan, the work was anticipated to occur over the period 2006 to 2015.

The single largest element, the construction of a metro system for the greater Dublin area, is yet to commence. The plan comprises two metro lines: Metro North linking the city centre with the airport and continuing to north county Dublin, and Metro West, linking outer Dublin centres Tallaght, Clondalkin, Liffey Valley and Blanchardstown, with connections through the city centre, to the Metro North and existing rapid transit (Luas Red line). Metro West is presently at the stage of designing lines and stops, whilst Metro North is reported to be at the ‘permission to build and operate’ stage.

The Metro North line presents interesting features: consisting of underground, surface and elevated tracks over a total length of 18 kilometres, 15 initial stops are planned, with some future additions anticipated. In the current economic climate, cost estimates ranging from €3-6 billion are inevitably a serious concern (for commercial reasons, the Rail Procurement Agency has not disclosed expected costs in full). A framework for modelling impact scenarios is essential.

In earlier stages of the project, route options and the effect on properties in the vicinity of the line were identified, both during and after construction. This was supported by work of the Dublin Transport Office (DTO), using SATURN models of optimal flow across the road traffic network. SATURN (Simulation and Assignment of Traffic in Urban Road Networks) is the model used by the DTO to help predict, for example, the impact on traffic of introducing Luas, building the Dublin Port Tunnel and completing the C-Ring motorway. The model is thus the principal design and evaluation tool for these and all major road and public transport proposals currently being planned and implemented in Dublin. The final proposed route for the Metro is a compromise between earlier options, but further assessment is needed, not least to address the network’s robustness to failure. One option is to consider an importance factor for each of the links and nodes.

Whilst the SATURN model is not directly concerned with robustness of the network, it can be used, in conjunction with the key system equations of Nagurney and Qiang (2007, "A network efficiency measure for congested networks." Europhysics Letters 79(38005): 1-5), to look at network efficiency, together with the importance of individual network components.

Specifically, following Nagurney and Qiang (2007), given the topology of the network and the demand for transport across it, the measure of network performance/efficiency is based on summing the ratio of demand to equilibrium disutility (minimal path cost) for each of the origin/destination (O/D) pairs in the network, and then scaling this by the total number of O/D pairs. The importance measure for a given component then depends on the ratio of the difference between the efficiency measures for the network with and without that component, to the efficiency measure of the network with all components included (see the flow diagram in Figure 1). 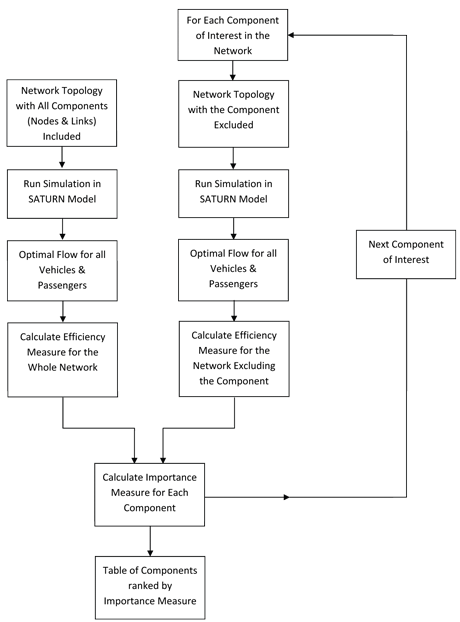 Using this approach, the importance of each link in the proposed Metro line and each station (node) along the line can be calculated and ranked to show its relative importance within the whole transport network.

Whilst the Metro line is itself a ‘linear’ network, this method enables us to assess it within the overall transport network, whereby users of the system can make choices regarding the routes and mode of transport.

Several alternative transport systems have been introduced in Dublin over the last three decades. The Dublin Area Rapid Transport system (DART) system (which came in to operation in 1984) increased its passenger capacity by 12.5% in 2000, and by a further 19.6% of the original figure in 2003 to meet demand. Similarly, the newer road-based light rail (Luas Green and Red lines) has seen a 65% increase in the number of trams. A metro system, serving initially the north and west of the city, but with the potential to complete or link with existing modalities, will have to be assessed both in its own right and in terms of its complementarity.

While an initial integrated model at network level is unlikely to answer all questions raised, it seems evident, (given recent experiences with alternative modalities), that assessing the Metro’s potential to have a positive impact on road usage and the ‘greening’ of Dublin transport, is a necessary step in the planning process.

Please contact:
John R Walsh
The Economic and Social Research Institute, Dublin
Tel: +353 1 8632054
E-mail: This email address is being protected from spambots. You need JavaScript enabled to view it.