Overview@aGlance is the name of a collaborative overview system that integrates a number of technologies to provide overview and support collaboration between emergency response teams at large events such as music festivals.

The @aGlance system has just returned to Aarhus University from a beech wood near Skanderborg, Denmark, where it was trialled at the Danish music festival ‘Skanderborg Festival 2009’. The festival site and its surroundings consisted of a forest with hilly terrain and narrow paths, making it an extremely challenging and thereby perfect setting for testing out this technology, which is intended to support emergency response personnel at geographically and organizationally distributed events.

Forty thousand attendees and ten thousand volunteer helpers and emergency staff (police, security, local alarm centre, coordinators, stretcher teams etc) were gathered at the annual festival in the wood. The emergency staff tested @aGlance together with developers from the Computer Science Department at Aarhus University and The Alexandra Institute. This technology represents a big step towards making this festival safe and secure for visitors in the future. 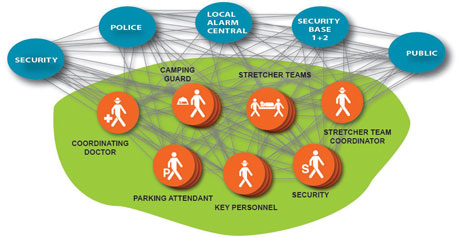 Erik Pong Madsen, who has been responsible for security at the festival for 29 years, said, "The @aGlance system provides us the needed overview of our emergency response personnel, of the festival and its surroundings. In the end it is a question of saving time and money – but it all comes down to saving human lives and ensuring a safe festival for our 50 000 guests."

The @aGlance system integrates well-known technologies such as GPS radios, mobile phones, remotely controlled video cameras, WiFi access points and monitors (large stationary and smaller portable), GIS data and 3D visualization. This provides emergency response personnel with a common and dynamic frame of reference, improving their overview of the festival. In particular, they:

The backbone of this system is an integrating 3D environment. It contains 3D models of the Skanderborg area, camping areas, festival site, stages, stalls, service centres, live video feed from the site, and tracking of stretcher teams, security guards and coordinators, to mention a few.

A comprehensive overview is provided by means of: 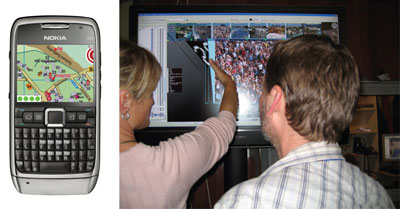 The @aGlance system supports collaboration and overview, which are of paramount importance to emergency response personnel. A video browser shows all selectable video feeds from 24 video cameras centrally placed at the festival site, and tracked personnel are represented in the model, along with patients, place and position.

In the case of an emergency, the patient is pointed out by the local alarm centre and placed in the correct position in the 3D environment. The required personnel (eg doctors, stretcher teams and security teams) are notified and can see the same part of the 3D environment as the coordinators. For a given user this may include, for example, where the patient is, which way to go, where his own team is (GPS tracked) and where the doctor and other vital personnel are heading (also GPS tracked). The system also supports visual communication as the users are able to draw ambulance roads, barriers or take pictures of the situation – which will then pop up in the correct location in the common 3D environment. In addition, in order to support crowd control and to prevent bottlenecks, the system analyses the video feeds to indicate activity, which is then also shown in the 3D environment.

In all, the Skanderborg experiment was a huge success. The festival visitors were in favour of the video cameras due to the safety they provided, and the festival staff used the system constantly to maintain an overview of what was happening on the site. The festival staff were happy to see their ideas from the iterative process based on user-centred design brought to life. The developers were happy to see it work – most of the time. In preparation for next year, they will work on further development and integration of innovative ideas.
The project is partly sponsored by the ICT-competence Centre ISIS Katrinebjerg. The experiment was a collaboration between the Computer Science Department, Aarhus University, the Alexandra Institute, the Skanderborg Festival Club and the software firm 43D. In the @aGlance project, Polycom and Sølund are also partners.

Marlene Nybro Thomsen
E-mail: This email address is being protected from spambots. You need JavaScript enabled to view it.
Aarhus University, Denmark