On 8 October, the Association for Computing Machinery (ACM) highlighted its ACM Europe initiative aimed at recognizing and supporting European members and ACM activities in the region, during a special reception in Paris honouring achievements in European computer science.

ACM is the world’s largest educational and scientific computing society, uniting computing educators, researchers and professionals to inspire dialogue, share resources and address the field’s most pressing challenges. Its mission is to ensure a stronger collective voice for the profession through thought leadership, promotion of the highest standards and the recognition of technical excellence, supporting the professional growth of its members by providing opportunities for life-long learning, career development, and professional networking. 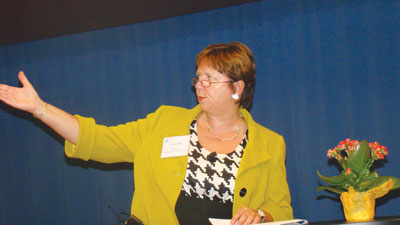 ACM Europe is spearheaded by fifteen leading computer scientists from academia and industry, who have recently formed the ACM Europe Council, in order to expand ACM’s high-quality technical activities, conferences, and services in the European region. ACM President Professor Dame Wendy Hall said, "our goal is to share ACM’s vast array of valued resources and services on a global scale. We want to discover the work and welcome the talent from all corners of the computing arena so that we are better positioned to appreciate the key issues and challenges within Europe's academic, research, and professional computing communities and respond accordingly. For us, ACM Europe is about seeing leading European computer scientists shape and enhance what ACM does in Europe and for Europe".

Today’s ACM European contingent includes more than 15,000 members and over 100 chapters, as well as an ever-growing number of ACM-sponsored conferences and symposia. The ACM Europe Council will serve this growing constituency by increasing the number of chapters, particularly for students; expanding interest in nominations for the many ACM professional awards and distinguished member grades; and engaging ACM’s Special Interest Groups to focus on Europe when planning conferences and major events.

Fabrizio Gagliardi, ACM Europe Council Chair and Director of External Research Programs for Microsoft Research Europe, hailed the intent of ACM’s European aim of illuminating the role of computing in driving innovation in a global environment. “By strengthening ACM’s ties in the region and raising awareness of its many benefits and resources with public and European decision-makers, we can play an active role in the critical technical, educational, and social issues that surround the computing community,” he said.

ACM, which serves a global community of over 95,000, unites the world’s computing educators, researchers and professionals to deliberate ideas that constitute the lifeblood of the global technical community and disseminates the fundamental discoveries in computing through the ACM Digital Library, the most comprehensive resource for exploring the accumulated knowledge, defining also curricula and accreditation standards for university computing programmes and working to strengthen the foundations of computing education at the pre-college level.