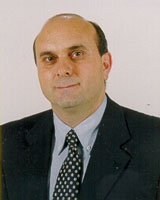 Constantine Stephanidis, Director of FORTH-ICS and Member of the ERCIM Executive Committe from 1998 - 2004 and member of ERCIM's Board of Directors since 2005; Chair of the ERCIM Working Group 'User Interfaces for All' (1995-2006) and Coordinator of the Coordination Action 'InterLink':

Active from 1995 to 2006, the ERCIM Working Group 'User Interfaces for All' had systematically promoted the proactive realisation of the Design for All principles in Human-Computer Interaction (HCI). The Working Group organised nine particularly successful truly international workshops, bringing together researchers from beyond different ERCIM institutions and other European academic and research organisations. The ERCIM UI4ALL Working Group was the recipient of the ERCIM WG Award in 2000. It constitutes a good practice example of how to successfully create and sustain a research community, and how to contribute to the establishment of a scientific field, in this case Universal Access and Design for All.

Two Coordination Actions, administratively coordinated by ERCIM and scientifically coordinated by ICS-FORTH, have been funded by the FET Programme of the European Commission to set the bases for future research directions in critical ICT thematic areas. The first, named BEYOND-THE-HORIZON (from January 2005 to June 2006), addressed at a European level the thematic areas of Pervasive Computing and Communications, Nanoelectronics and Nanotechnology, Security, Dependability and Trust, Bio-ICT Synergies, Intelligent and Cognitive Systems, and Software Intensive Systems. The second, named InterLink (October 2006 - March 2009), addresses at an international level the thematic areas of Software Intensive Systems and new Computing Paradigms, Ambient Computing and Communication Environments, and Intelligent and Cognitive Systems.