The wind power industry is a good example of an industrial network with strict performance, security, and reliability requirements. The VirtuWind project aims to develop and demonstrate a software defined network (SDN) and network function virtualisation (NFV) ecosystem, based on an open, modular and secure framework.

Applications are becoming increasingly networked and distributed, especially in industrial domains, such as smart grid, factory automation, process automation, transportation and logistics. Many of these applications have very stringent requirements on the underlying communication network(s). This is currently addressed by using complex and proprietary network protocols and mechanisms, but this approach has major drawbacks: substantial engineering, operations and maintenance efforts; complex configuration of devices and services; and significant (planned) down times during system upgrades. Thus, there is a trend in industrial networks to move away from closed, implementation-specific solutions towards more open solutions. Open, standardised solutions come with their own problems, however: increased openness makes intra-domain operation and security more critical than ever before and different network providers may implement the same functionality differently, with interoperability and inter-domain operation becoming a huge concern.

VirtuWind will develop and demonstrate a software defined networking (SDN) and network function virtualization (NFV) ecosystem, based on an open, modular and secure framework [1]. The project showcases a representative use case of an industrial network by demonstrating a prototype of an industrial control network for wind park operations. It also addresses the challenges in intra-domain and inter-domain scenarios of real wind parks, and validates the economic viability of the demonstrated solution. The wind park control network has been chosen as a professional application in VirtuWind as wind energy has now established itself as a mainstay of sustainable energy generation. By envisioning lower capital expenditure and operational expenditure costs in control network infrastructure, VirtuWind will play an important role in assisting the wind energy sector to reduce costs. The VirtuWind solution also has the potential to offer multiple benefits to the communication networks of other industrial domains. 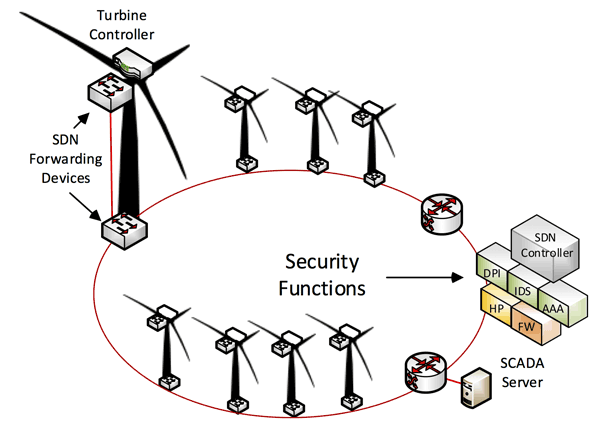 Introducing revolutionary concepts, such as SDN and NFV, to the communication networks of critical infrastructures, requires a careful investigation of the new security risks, since new threats – not encountered in legacy systems – will occur [2]. More specifically, SDN is currently only used in closed environments, such as data centres. However, the use of SDN in cross-domain setups and the absence of multi-operator collaborative incident detection mechanisms introduces new threats. The nature of software increasingly used in SDN and NFV environments comes with additional security threats, such as data forging, application programming interface (API), controller and management exploitation which need to be avoided by means of suitable mechanisms, e.g., strong authentication, access control, application isolation and sandboxing, flow integrity and conflict resolution as well as threat detection and encrypted interfaces.

One of the core objectives of VirtuWind is to assure security-by-design for the SDN and NFV ecosystem. To this end, VirtuWind aims to establish comprehensive threat and risk frameworks for industry-grade SDN networks. Suitable mechanisms will be developed for network monitoring and intrusion detection for SDN networks. More specifically, VirtuWind aims to address the following requirements:

Authentication, Authorization and Accounting (AAA)
The presence of mechanisms ensuring AAA functions, distributed horizontally and vertically on the SDN, if needed, are necessary for validating identities and requests, and for providing logging of the associated events. Authorisation (access control) and other control plane elements, along with the associated interfaces, will provide isolation and QoS-awareness to the overlaying applications. Mechanisms for ensuring accountability of controller actions affecting cyber-physical systems will be enabled. In addition, north bound interfaces (interfaces to the business applications) should allow applications to express their requirements in terms of network policies, e.g., flow isolation and QoS profiles. Based on the information exchanged through this interface, authentication and authorisation of stakeholders could be realised via access and role-based lists for different levels of function granularities.

Secure Interfaces
The SDN infrastructure will be reachable from beyond a network services platform’s domain and needs protection from misuse and abuse. More precisely, security mechanisms for the protection of controller and inter-controller interfaces should be established. In addition, the definition of security mechanisms for north-/southbound and inter-controller interfaces, securing the controller can prevent adversaries from applying Denial of Service (DoS) attacks.  Design principles followed by VirtuWind will guarantee that secure communication for all interfaces (north-/south-/east-/west-/bound) is possible. The communication channel between each SDN layer will be well protected (e.g., OpenFlow protocol is protected by Transport Layer Security (TLS)). Security measure techniques such as secure coding, deployment of integrity checks, and most importantly, application digital signing, will be used. Moreover, all communication channels can be hardened using TLS security.

Incident Detection Analysis and Prevention
The development of intra- and inter- domain incident detection mechanisms including real-time detection, analysis and prevention is necessary for the trace-backs and audits enhancing root cause analysis during incident response, and failure analysis mechanisms. To achieve this objective, VirtuWind will deploy network monitoring and intrusion detection for identification of attacks and run-time network adaptation for attack response and mitigation mechanisms. Mechanisms such as firewalls (FW), intrusion detection systems (IDS) and deep packet inspection systems (DPI) should be in place to detect malicious activity on the SDN, assess its impact, and evaluate the system’s response and attack mitigation effectiveness. The intrusion detection mechanism will be also based on ‘honeypot’ (HP) technology that can visualise and show in real-time the attacks in the inter-domain SDN. Application, control and data plane should feature the appropriate elements (e.g., dummy devices) and interfaces (e.g., supporting mirroring and redirect traffic) to enable the deployment of data and/or control plane SDN honeypots and the backend assessment of the information they aggregate.

Please contact:
Ioannis Askoxylakis
ICS-FORTH, Greece
This email address is being protected from spambots. You need JavaScript enabled to view it.