We define the concept of ‘digital witness’; personal devices able to actively acquire, store and transmit digital evidence to an authorised entity, reliably and securely.
The growing density of networks formed by devices with heterogeneous capabilities and users with different profiles poses new challenges to cyber-security. One clear example of this is the Internet of Things (IoT) paradigm, where cyber-offenses – not only cyber-attacks – take place in very dynamic, polymorphic and even isolated scenarios [1]. There are too many devices to be controlled, and any device with minimal computing and communications capabilities can perpetrate cyber-attacks without leaving a trace. In such a scenario, and in order to clarify the facts of a cyber-crime scene, it is essential to collect and handle electronic evidence within a Chain of Custody (CoC). Yet this is a problem that is impossible to solve only with existing tools.

The IoTest project [L1] aims to help solve this problem by introducing a security solution that is drastically different from those that have been used to date. This project proposes the design and development of the ‘digital witness’, a trusted electronic device capable of obtaining and safeguarding electronic evidence. More specifically, a digital witness: (i) binds the user’s identity to his/her personal device, (ii) has a core of trust that is able to protect the integrity of one or more electronic pieces of evidence according to the law, within a trusted execution environment, (iii) ensures that only authorised entities have access to the evidence, and (iv) is able to witness the traceability of the evidence. 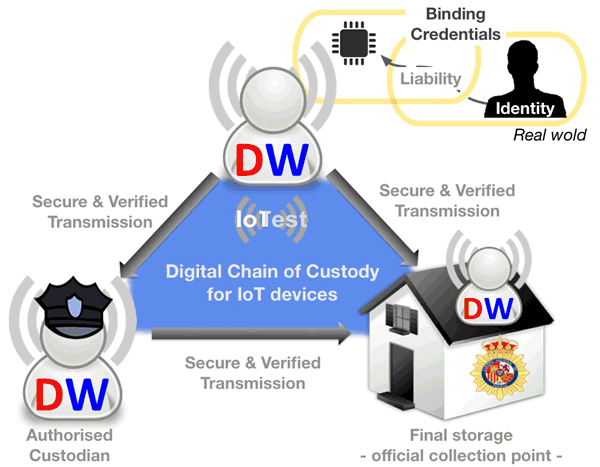 These five basic requirements help to define a robust digital witness, and comply with several existing challenges in the emerging IoT-forensics paradigm [3]. In order to fulfil these requirements, the project will explore various novel concepts, such as the notion of binding credentials (BC). In this context, a BC is defined as any mechanism that provides a link between a user and a device, based on the user’s identity. In addition, BCs can be used in conjunction with biometric capabilities in personal devices to ensure the presence of the user at the key moments within the lifecycle of the digital evidence.

IoTest is a novel project recently funded by the Spanish Ministry of Economy and Competitiveness under the EXPLORA Programme, a complementary action that encourages frontier research. Precisely, this project also will investigate the viability of more radical ideas in the context of future network environments, such as the implementation of the concept of digital witness in local clouds of personal IoT devices, the deployment of virtual digital witnesses that are linked to the identity of a privileged digital witness device, and the implementation of binding credentials associated to these virtual witnesses.

By using digital witnesses as a foundation for the creation of a digital chain of custody within IoT scenarios, the IoTest project aims to offer a dynamic solution that will record events on heterogeneous, unpredictable and uncertain scenarios. Moreover, since existing digital evidence processes and regulations are not prepared to deal with the new cybersecurity issues created by these highly dynamic and distributed scenarios, we expect that the deployment of digital witnesses will result in a qualitative advancement in the evolution of electronic evidence management systems, improving their ability to detect attacks and identify cybercriminals.

Please contact:
Ana Nieto, University of Malaga, Spain
+34 951 952914,
This email address is being protected from spambots. You need JavaScript enabled to view it.