by Christoph Köhn and Ute Ebert

Active thunderstorms can emit gamma-rays and even antimatter. In fact, growing lightning channels can act as enormous particle accelerators above our heads. Researchers of the Multiscale Dynamics group at CWI have modelled and simulated these multiscale processes. They corrected previous calculations of gamma-ray emissions and, for the first time, computed the emission and propagation of positrons and neutrons. The neutrons are produced in nuclear reactions in air and might reach the ground.

Since 1994 we have known that active thunderstorms can generate ‘terrestrial gamma-ray flashes’, and in 2009 NASA’s Fermi satellite detected that thunderstorms can even launch beams of antimatter, namely positrons, the anti-particles of electrons (see link below). The positrons were so numerous that they could be detected at 500 km altitude by the satellite. Other researchers claim that growing lightning channels would also emit neutrons, though these observations are still under debate. Gamma rays, positrons and neutrons are typically generated in nuclear reactions – so what is going on in the clouds above our heads and around our airplanes? Should we worry? And what radiation is liberated when a lightning channel approaches ground?

The emission of particles with such high energies was not expected by lightning experts. Researchers from the Multiscale Dynamics research group at CWI, headed by Ute Ebert, were well positioned to simulate and understand this phenomenon as they were already investigating electron acceleration in technological discharges at atmospheric pressure, in the context of energy efficient plasma processing and plasma medicine and in the context of high voltage switches for electricity nets.

In essence, growing discharges in nature and technology can accelerate electrons to very high energies within an ionization wave. This process occurs very far from equilibrium in a small region around the tip of the growing channel, and the available electric energy is converted there into electron acceleration, and ionization and break-up of a small fraction of molecules, while the gas overall remains cold. If the electron energy is high enough, the electrons can generate gamma-radiation when colliding with molecules; and the gamma-radiation can subsequently create electron positron pairs and liberate neutrons and protons from the nuclei of air molecules. But the voltage in thunderstorms can reach the order of 100 MV, while the highest voltages anticipated for future long distance electricity nets are 1.2 MV. Therefore, technology oriented models have to be extended to deal with the extreme conditions of thunderstorms. 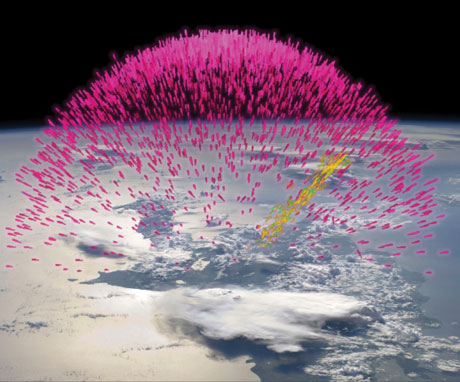 To accurately model these processes, models have to cover multiple scales in space and in energy. The CWI models start out from parameterizations of the processes that occur when electrons or other particles collide with air molecules. Some of these parameterizations had to be revised. They enter into the discharge model on the smallest scale which is of MC/PIC type, i.e., a Monte Carlo model with Particle in Cell approximation for the coupling of electric charges to the electrostatic Poisson equation [1]. In this model, the electrons follow their classical or relativistic path between air molecules, and their collisions with a random background of molecules are modelled with a Monte Carlo process. Proper averaging over the random electron motion (by taking moments of the Boltzmann equation and by truncating after the fourth moment) has delivered a set of four coupled partial differential equations for electron density, electron flux, electron energy, and electron energy flux [2]. An important and difficult aspect of both the MC/PIC model and the PDE model is the coupling of the electric charge density to the electrostatic Poisson equation. Solving the Poisson equation is a classical numerical problem. In combination with local grid refinement it is also a challenging problem, since in each time step Poisson equations are to be solved on computational grids that move in time.

A particular challenge in the present project was to also bridge the many orders of magnitude of particle energies: the electric potential differences in thunderclouds are so high, that electrons can be accelerated to 40 MeV and more, which is over 100, 000, 000 times their thermal energy at room temperature (0.025 eV). This means that cross section databases for particle collisions have to span more than eight orders of magnitude, and that databases from gas discharge physics (up to 1 keV) have to be joined with those from nuclear and high energy physics (typically above 1 MeV), and the energy gap between these databases had to be filled.

Based on careful consideration of the specific processes of air molecules, and collaborating with experts from different disciplines, Christoph Köhn chose appropriate approximations within his PhD thesis [3]. This allowed him to approximate the electron acceleration ahead of a growing lightning channel, and the subsequent production of gamma-rays. Köhn was then the first to calculate the production and propagation of positrons and neutrons. Both positrons and neutrons can propagate from the thundercloud upward to the satellite, and they also can reach ground. So in terms of ground measurements it might appear as if a thunderstorm were a small nuclear reactor.

The theoretical studies were performed by Christoph Köhn within his PhD thesis under the supervision of Ute Ebert, the head of the Multiscale Dynamics research group at CWI. As a counterpart, Pavlo Kochkin investigated the emission of hard X-rays from meter long sparks in the high voltage laboratory of Eindhoven University of Technology under the supervision of Lex van Deursen. The research of both PhD students was funded by the Dutch technology foundation STW.