The aim of the Dynamic Cargo Routing on-the-go (Dynacargo) project is to optimize the fleet operation for the city waste collection through urban-scale sensor networks, delay-tolerant networking, citizen participation, and dynamic routing.

The Dynamic Cargo Routing on-the-go (Dynacargo) project aims to develop a state-of-art waste collection information system that is capable of dynamically optimizing the service plans of the garbage trucks (vehicle routes) based on the collection of waste bin fill level information. The project involves the TEI of Western Greece as a lead partner and the Industrial Systems Institute of R.C. “Athena” as scientific partners, two innovative SMEs from the ICT sector (Mindware and OrasysID), and the Municipality of Nafpaktia, Greece. The system is tested in the historical city of Nafpaktos (Lepanto). The project started in September 2013 and concludes in June 2015.

The efficient collection of urban solid waste is a growing problem for cities and urban areas. Optimized service plans can save money, reduce emissions, and improve a city’s image. However, waste bins are still emptied by experience and ‘a good guess approach’ although the advantages of utilizing ‘actual status information’ are evident [1].

In the Dynacargo project, we seek for applicable solutions at the whole chain of information collection and diffusion (Figure 1). At the bin level, we research sensors, mainly ultrasound, that cope with the harsh environment and can provide accurate fill level information while randomly-placed solid objects of different shapes are placed in the bin. Given that the bins are installed in the roads or pavements, battery operation must be assumed and strategies for longevity must be devised. 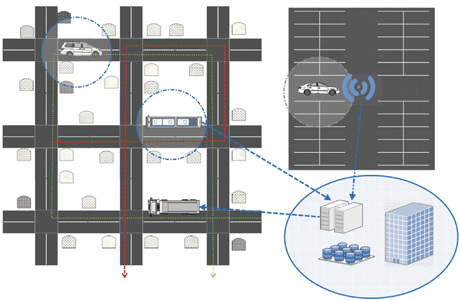 At an urban scale of operation, thousands of sensors are sparsely deployed in the city terrain. System installation and maintenance, ensuring radio coverage, and retaining network formation can become an unmanageable task. The Dynacargo project opts for low-range, point-to-point communications based on RFID technology so as to cope with these issues. Vehicles roaming around the city and equipped with readers collect the information from the bins. In order to cope with increased telecommunication costs and infrastructure upgrades, these mobile sinks defer transmissions until an Internet connection becomes available. The Delay Tolerant Networking paradigm ensures that the information is retained in the bins, until a mobile sink passes nearby and then in the sinks, until an Internet connection is available.

At the information system in the backend, the information from the mobile sinks is received and stored, along with historical data and information regarding the status of the garbage truck fleet and the city infrastructure. Artificial intelligence techniques are used to estimate missing fill level reports from the waste bins. The service plan for the fleet is modelled as a Capacitated Vehicle Routing Problem (CVRP). The Dynacargo route optimization module computes optimized service plans while the fleet is on-the-go.
At the garbage truck, a notification system is installed in the form of a mobile app. The app assists the city workers by providing a rich-media interface to get information about the service plan and the reported or estimated waste bin fill levels. Furthermore, it provides videoconferencing services with the city operating centre based on LTE technology so as to ease notification and re-arrangements while on the go and to report any unforeseen issues on the spot (e.g. a vandalized waste bin).

The citizens interact through a web portal and a mobile app with the Dynacargo system. Individuals can learn about service plans, bin locations, and their fill level (historical, estimated, and updated information). The mobile app can also be used for crowdsourcing fill level and status information from the field, effectively engaging the citizens in the collection process and transforming them to ‘prosumers’, i.e., both producers of solid waste and information about it and also consumers of the information regarding the waste collection city service.

Currently, the Dynacargo project has collected the requirements and designed the system architecture [2,3]. The various system components are finalized and the system integration process initiated. In the next few months, a small-scale prototype of the system will be installed in the city of Nafpaktos, Greece so as to test and demonstrate its operation in a real environment.

Efficient solid waste collection from cities and urban areas is a priority issue for city authorities. The benefits of a streamlined operation based on ICT are apparent for the smart city of the future and its stakeholders, including the city authorities, the inhabitants, the environment, and the quality of experience for the visitors.