MediaEval is an international multimedia benchmarking initiative that offers innovative new content analysis, indexing and search tasks to the multimedia community. MediaEval focuses on social and human aspects of multimedia and strives to emphasize the ‘multi’ in multimedia, including the use of image, video, speech, audio, tags, users, and context. MediaEval seeks to encourage novel and creative approaches to tackling these new and emerging multimedia tasks. Participation in MediaEval tasks is open to any research group who signs up. MediaEval 2013 was the fourth evaluation campaign in its current form, which follows on from the VideoCLEF track at CLEF 2008 and CLEF 2009.

MediaEval 2013 offered 6 Main Tasks and 6 Brave New Tasks coordinated in cooperation with various research groups in Europe and elsewhere. The following Main Tasks were offered in the 2013 season: 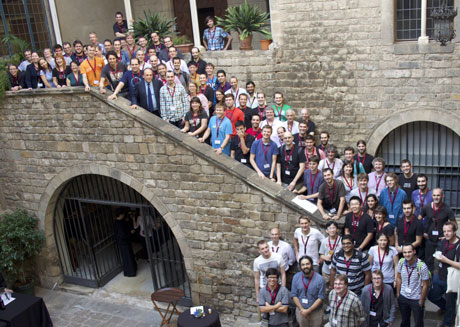 The MeviaEval 2013 campaign culminated in the annual workshop which was held at Reial Acadèmia de Bones Lletres in Barcelona, Spain from 18th-19th October. The workshop brought together the task participants to report on their findings, discuss their approaches and learn from each other. MediaEval participation increased again in 2013 with a total of 95 papers appearing in the Working Notes, and 100 participants attending the workshop. In addition to organizer and participant presentations, the workshop featured invited presentations by Jana Eggink, BBC Research and Development, London and Frank Hopfgartner, Technische Universität Berlin, Germany. The Working Notes proceedings from the MediaEval 2013 workshop have again been published by CEUR workshop proceedings.

MediaEval 2013 received support from a number of EU and national projects and other organizations including: AXES, Chorus+, CUbRIK, COMMIT/, Promise, Social Sensor, Media Mixer, MUCKE, Quaero, FWF, CNGL, Technicolor and CMU. We are also happy to acknowledge the support of ACM SIGIR for providing a grant to support international student travel.

The MediaEval 2014 campaign is currently getting underway with task resgistration opening in March 2014. The tasks will run through the spring and summer, with participants invited to present results of their work at the MediaEval 2014 Workshop which will again be held in Barcelona, Spain in October.

Please contact:
Martha Larson
TU Delft, The Netherlands
E-mail: This email address is being protected from spambots. You need JavaScript enabled to view it.