by Emanuele Salerno and Anna Tonazzini

The ITACA project (Innovative tools for cultural heritage archiving and restoration) is investigating new approaches to treat severe back-to-front interference in digital images of two-sided documents. This work is part of a vast research program on the study and preservation of historical documents, which, since 2004, has been supported in various forms by European funds.

Distinguishing the foreground pattern (eg text or graphics) from interference is a basic step in document understanding. When dealing with back-to-front interference, this is not always an easy task, as the front and rear patterns are mixed nonlinearly and the interference strength varies from point to point. When imaging a physical document, the transparency of the paper combined with the features of the capture device cause the content of each side to appear in the opposite side's image as “show-through interference”. A similar effect (bleed-through) is caused by the ink bleeding from one side to the other.

These effects are intrinsically nonlinear. Moreover, the non-uniformity of the paper support, the varying strength of text strokes, and possible uncompensated variations in illumination often make these processes non-stationary. Based on a slight generalization of a model proposed in the literature for moderate show-through, we presented a nonlinear model that can account for show-through and, partly, for bleed-through [1]. We then augmented the model by introducing a space varying interference strength [2]. This new model is not yet fully non-stationary, as the convolutive effects and the typical non-linearities are considered constant throughout the image, but the experimental results compare very favourably with previous approaches, and the possibilities of discriminating foreground and interference are broadened significantly. 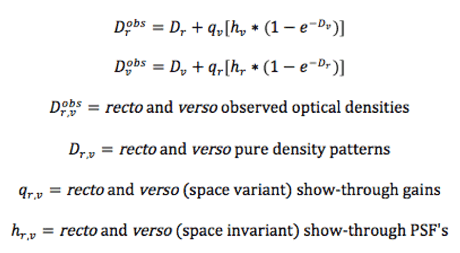 Figure 1 shows our data model: two coupled nonlinear equations, written in terms of the front and rear optical densities. As is known, optical density is related logarithmically to the commonly used reflectance value. The appearance of each side of the document is a nonlinear combination of the foreground pattern and a blurred and attenuated version of the pattern on the opposite side. Given the front and rear-side appearances, inverting this model means estimating the show-through point spread functions (PSF's), the show-through gains, and the front and rear-side pure patterns. Strictly speaking, a non-stationary model should include two space-variant kernels rather than two PSF's, and the show-through gains should depend on space. As a first attempt to treat non-stationary back-to-front interference, we use fixed PSF's all over the image pair while allowing the gains to depend on space. Approximated PSF's can simply be evaluated beforehand; once this is done, a straightforward formula allows us to estimate the gains in all the pixels where interference is present. An easy and fast constrained maximum likelihood scheme is then used to estimate the pure patterns. The results obtained are very promising, even though a general strategy is still to be found to cope with the saturation effects occurring where the foreground pattern occludes the show-through. 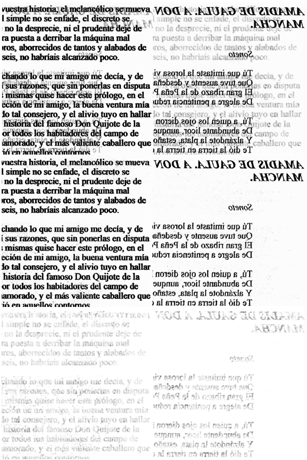 Figure 2 shows a typical result obtained in an apparently non-stationary case: the removal of the back-to-front interferences is very effective, and the gain maps show us that the distortion is significantly non-stationary. A comparison between the new results and those obtained through stationary models confirms the potential advantages achievable by accounting for non-stationarity. The type of fixed non-linearity we adopt is the same as that introduced for weak show-through in the paper that inspired our work [3]. It is likely that a stronger show-through or other phenomena, such as bleed-through, would need different non-linearities. Finding a suitable model for documents showing different kinds of interference might even prove to be impossible. In such cases, introducing non-stationarity could produce an additional advantage: providing an accurate and comprehensive data model could become less important - we could even return to a linear model. This is the focus of our current research, and our first results are corroborating our conjecture.

The ITACA project (POR-FESR Calabria 2007-2013) is led by TEA Sas, Catanzaro, Italy, a firm that provides consulting and cultural heritage digitization, processing, and management. The activity described here is being conducted at ISTI-CNR, Pisa. The research teams at ISTI and TEA are both members of ERCIM's MUSCLE working group, on Multimedia Understanding through Semantics, Computation, and Learning.

Please contact:
Emanuele Salerno
ISTI-CNR, Italy
E-mail: This email address is being protected from spambots. You need JavaScript enabled to view it.