Video-based imaging of animal behaviour is commonly used in biomedical studies. Imaging small and translucent organisms, such as worms or larvae, however, tends to require sophisticated illumination strategies. We developed a novel technique to image the contact surface between organisms and substrate utilizing Frustrated Total Internal Reflection. This technique has a wide range of potential applications.

Imaging the locomotion of animals in behavioural experiments has become commonplace. Over the past several decades, video-based quantification has become increasingly important in understanding the mechanisms involved in circadian rhythms, learning, courtship and various diseases. Even genetic inferences are possible based on the observable characteristics [1]. 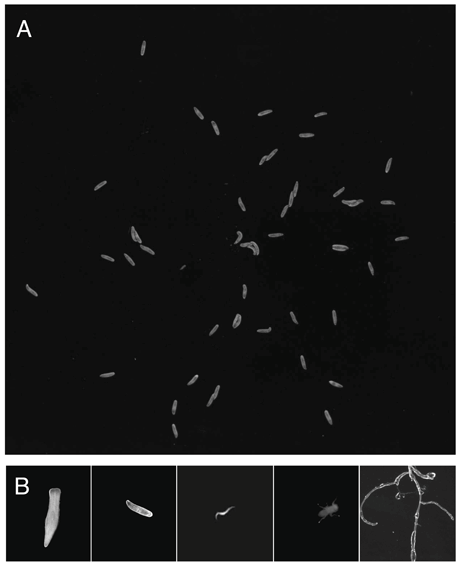 We have devised a novel acquisition technique to indirectly determine the shape and position of organisms. The technique, which is based on Frustrated Total Internal Reflection (FTIR), measures the contact surface between the organism and subsurface (FTIR-based Imaging Method: FIM) [2]. The FTIR-principle is well known in the human-computer interaction community, since it is used in the construction of touch devices [3], but it also has biomedical applications. We use Drosophila larvae as a running example (Figure 1a), since conventional imaging of translucent larvae suffers from a number of difficulties. However, FIM can be used for a wide range of applications (examples of FIM-imaged planarian, C. elegans, fruit flies, and Arabidopsis roots are shown in Figure 1b).

Instead of illuminating the scene with incidental or transmitted light, the light source is integrated into a subsurface, such as an acrylic glass plate (Figure 2a). Because of the optical density of glass and air, providing the angle of incidence is greater than a critical angle, the light is completely reflected at the glass/air boundary (ie total internal reflection). The critical angle depends on the refractive indices of both materials. To improve the environmental conditions for larvae, a thin but moist agar layer is placed between the animals and the surface. Since the optical density decreases (ie the refractive indices increase) from glass over agar to the larva, the light can pass through the layers while the angle of incidence decreases during the transition between the materials. If the angle of incidence is below the critical angle, the light is said to be frustrated since the reflection is no longer total at that point and can be measured by a camera from underneath (Figure 2b). As a result, only light reflections caused by the objects of interest are visible, while the surface appears as an almost black background, leading to a superior foreground-background contrast (Figure 1a). Furthermore, most disturbing artefacts, such as surface irregularities and light reflections caused by the surface area can be eliminated on a physical level, thus reducing the requirements for subsequent image analysis algorithms to facilitate automatic quantifications.

Because of the high contrast sensitivity of FIM, even internal structures of the animals become visible using relatively low-resolution cameras. For example, organs including the muscle attachments, the gut and the proventriculus can be identified in Drosophila larvae (Figure 2c). These new features can be used in the subsequent automatic image analysis to generate more precise quantifications. For instance, these structures were used to automatically identify the orientation (ie the head) of the animals [2]. Note that the spatial and temporal resolution of FIM is only limited by the resolution of the camera: FTIR is based on the principles of light, thus even small structures, such as the footprints of adult fruit flies can be measured (Figure 1b) [2].

In summary, FIM offers several advantages over conventional imaging: superb image quality, almost noise and background free recordings and the ability to visualize internal structures. Because of this and its straightforward and cheap construction, and its inherent high spatial and temporal resolution, FIM is feasible for a wide range of biomedical applications.