Very Large Data Bases (VLDB) is the premier annual international conference on database technologies, attracting more than 700 researchers, vendors, practitioners, application developers, and users from the top universities and the most important industrial players from the entire world. The conference features research talks, tutorials, demonstrations, and workshops, and covers current issues in data management, and database and information systems research. Data management and databases are among the main technological cornerstones of emerging applications of the twenty-first century.

This edition of VLDB took place in Riva del Garda (Italy) from 26-30 August 2013, and was organized by Prof. Themis Palpanas and Prof. Yannis Velegrakis, co-directors of the Data and Information Management group at the University of Trento. The conference attracted 730 participants from 40 countries - the highest number of participants in the last 27 years (and the second highest in the history of VLDB). The participants represented all the top international universities, as well as all the major international companies and industrial research labs, including Google, Oracle, Facebook, IBM, Microsoft, SAP, Twitter, Yahoo!, NEC, Hewlett-Packard, Greenplum, HTC, and EMC2. 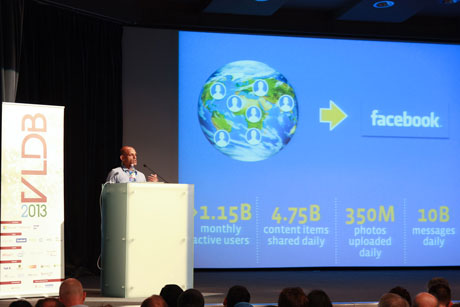 A central theme of this year’s conference was Big Data and its related issues. The technical program included three keynote talks: the first by Jay Parikh, the Vice-President of Infrastructure Engineering at Facebook, on how to build data infrastructures for web-scale problems; the second by Sam Madden, professor at MIT and leader of the MIT big data group, on a collaborative data analytics platform for large-scale data; and the third by Cynthia Dwork from Microsoft Research, on the problem of performing large-scale data analytics whilst preserving privacy. It also included two panel discussions on the information hidden in big data, and on experiences from startup companies, as well as four demos, six tutorials, four industrial and 16 research sessions. The videos of the keynotes and panels are available on the VLDB 2013 web site, alongside all the papers presented at the conference. The papers are published by the VLDB endowment and will also be available on the VLDB web site and in the ACM Digital Library.

ERCIM’s support of the conference played a significant role in its success, helping to attract high-profile speakers offering talks on state-of-the-art topics. Furthermore, the numerous ERCIM leaflets, articles and magazines that were supplied and distributed during the conference acted as excellent advertisements for European research.